It's only been two days since we hosted our 14th annual Cymbria Investor Day, but we wanted to share a video of the insights from CEO Patrick Farmer and the Investment team for those who couldn't attend. Discussion focused on finding businesses they believe can double in value over the next five to seven years. There are examples of buying companies using proprietary insights that haven't yet been recognized by the market. As well as some of the unique investments that could happen only due to the flexibility afforded by Cymbria's unique structure.

If you're reading this, then you understand the importance of diversity. This is why we've brought you a tastefully eclectic set of merchandise that allows you to show your appreciation for our investment approach without hurting fees by asking us for freebies. There's an updated book, a t-shirt, mugs (both for those staying in one place and on the go) and even...honey? We hope you'll "bee" as excited as we are about them. 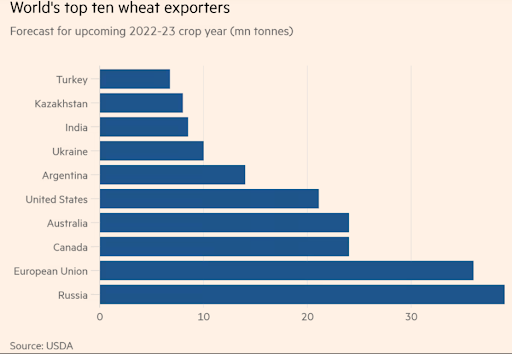 India, the world’s second-largest wheat producer, has banned exports of the grain with some exceptions, a move that could compound a worldwide shortfall worsened by the war in Ukraine and exacerbate an already dire forecast for hunger across the globe.

The war has interrupted wheat production in Ukraine and Russia, which are major suppliers. Fighting and blockades in the Black Sea have disrupted transport of the grain. And poor harvests in China, along with a heat wave in India and drought in other countries, have further snarled global supply.

India has about 10 percent of the world’s grain reserves, according to data from the United States Department of Agriculture, a large surplus resulting from its heavy subsidizing of its farmers. It has been seen for months as a country that could help make up for global supply shortages.

But agricultural experts said that an ongoing heat wave and rising temperatures could affect the harvest this year, which could be a factor in why the government changed course and imposed a ban on the exports.

The Commerce Ministry notice on Friday said that wheat exports were immediately banned, with some exceptions, because a sudden spike in the crop’s price had threatened India’s food security. Limited exports will be allowed at the request of individual governments whose own food supply is vulnerable, the notice said.

OPEC continues to undershoot its oil production target in the OPEC+ deal, failing in April to boost output as much as required by the agreement.

All 13 members of OPEC – including Iran, Libya, and Venezuela exempted from the OPEC+ deal – saw their production rise by just 153,000 barrels per day (bpd) collectively, to 28.648 million bpd in April, the organization’s Monthly Oil Market Report (MOMR) showed on Thursday.

The top three OPEC producers, Saudi Arabia, Iraq and the UAE, saw the highest increases in their respective oil production last month, while output in Libya plunged by 161,000 bpd to below 1 million bpd, at 913,000 bpd, according to OPEC’s secondary sources.

Libyan oilfields and terminals have again been under blockade in recent weeks amid protests, clashes, and disputes over the distribution of oil revenues in the country with two rival governments, with incumbent Prime Minister Abdul Hamid Dbeibah refusing to step down for newly sworn-in eastern Prime Minister Fathi Bashaga.

Excluding Libya and the other two producers exempted from the OPEC+ deal, the ten OPEC members bound by the agreement saw their collective production at 24.464 million bpd in April, OPEC’s figures showed. This compares with a collective quota for OPEC-10 of 25.315 million bpd for last month.

The gap is more than 800,000 bpd, mostly due to severe underperformance from African members Angola and Nigeria, which have been pumping 300,000 bpd-400,000 bpd below quotas each, for months, due to a lack of investment and capacity.

Bloomberg Radio host Barry Ritholtz speaks with Boaz Weinstein, who is founder and chief investment officer of Saba Captal Management. Prior to launching Saba as an independent firm in 2009, Weinstein was co-head of global credit trading at Deutsche Bank, where he founded Saba Principal Strategies as a proprietary trading group in 1998. Weinstein first came to public notice as the fund manager on the other side of the derivatives trade from the London Whale, which ultimately cost JPMorgan Chase & Co. losses of at least $6.2 billion in 2012.

Reflecting on his own influences, Conan O’Brien said: “It is our failure to become our perceived ideal that ultimately defines us and makes us unique.”

Modern creators do the opposite though. They refuse to imitate others and stubbornly insist on originality, which they hold as their highest virtue — even when it comes at the expense of quality. They might deny their ambition toward originality when you talk to them, but they reveal it in their actions. In general, creators spend much less time imitating their heroes than they do trying to make something new. I call it the Originality Disease — a pervasive plague that makes creators feel scared to imitate other people’s styles.

The problem may be worst among writers, who speak about their craft with levels of mystery that are usually reserved for the numinous. Writers would be smart to learn from other fields, though.

Where does this Originality Disease come from?

I have three explanations.

The first is pretty clear: misunderstanding inspiration. Some of the juiciest inspiration comes from admiring (and maybe even reverse-engineering) other people’s work. But many people think inspiration needs to strike out of thin air, like a bolt of lightning. They fear that the Muses of novelty won’t visit them if their mind is contaminated with what’s been done before. In blind pursuit of originality, they avoid studying anything that’s come before them out of a fear of tainting their minds with the stain of influence. Rather than standing on the shoulders of people who’ve come before them, they look within themselves for a breakthrough idea.

The second is more subtle: fetishizing originality. I think this part of the disease comes from academia, where people do study those who’ve come before them—but only so they can do something different. Since scholarly journals insist on original contributions, academics are incentivized to study things nobody else is studying. The challenge, though, is that originality and usefulness are not the same thing. I worry that academics are so focused on checking the “nobody’s ever written about this before” box that they sometimes forget to make useful contributions to human knowledge.

The third is pure conjecture: self-obsession. Perhaps our Originality Disease has its roots in Freud’s work, which still underpins our model of human psychology. To the extent that ideas like the ego and the subconscious seem trivial, it’s only because they’ve been so influential. Freud’s ideas basically went viral, and as they did, made their way to Salvador Dalí who led Europe’s surrealist painting movement. Instead of trying to capture reality like the Realists or interpret it like the Impressionists, the Surrealists went inwards and painted the landscape of their own consciousness. They rejected logic and reason in favor of dream-inspired visions.

Posted by EdgePoint at 1:16 PM