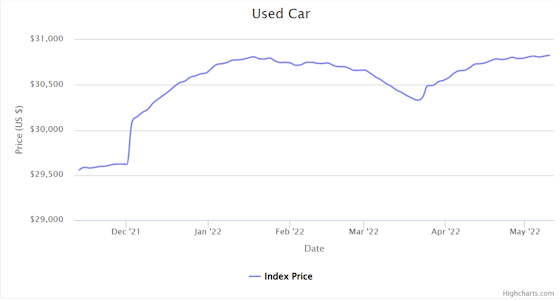 Big investors are starting to warm to energy.

For more than five years, endowments, pension funds and other so-called institutional investors shunned the oil-and-gas industry because of big losses and concerns about climate change.

The lack of new investment is one reason oil and gas supplies haven’t kept up with surging demand and the loss of output caused by the Russian invasion of Ukraine.

The short-term factors and a growing realization that new supplies will be crucial, even as the world transitions to cleaner energy sources, have some investors reconsidering their aversion to energy.

New money could boost production, though there are other factors limiting supply. And any increase in investments will likely be modest, as some groups such as college endowments or public pension funds continue to stay away.

Last year, when the Houston private-equity firm Quantum Energy Partners met with big investors ahead of a potential new fund launch, it heard concerns that the transition to cleaner energy sources meant there would be little need for new oil and gas development, says Wil VanLoh, Quantum’s founder.

After the Ukraine war began and European nations started feeling pressure to locate new energy supplies, Quantum began fielding calls from many of those same investors—they were expressing interest in oil and gas once again. The firm recently began fundraising for a new fund with a target size of $5.6 billion. Quantum also plans to start an energy-credit fund in the midst of growing interest from investors.

“The difference in tone and receptivity since the Russian invasion has been amazing—it has been a 180-degree change in three months,” says Mr. VanLoh. “Last year, we had to convince people the oil and gas business would be around in five to seven years.”

The horizon south of the Statue of Liberty is interrupted by the silhouettes of several oil-tank farms. New York harbor is the home of Wall Street and financial wizardry, but it’s also the place where old-school oil traders still buy and sell refined petroleum products the old way, by the gallon, setting benchmark prices. In the 1990s, Morgan Stanley’s Olav Refvik controlled so many of those tank farms that he was known as “the king of New York harbor.” If Refvik was still trading today, he would find his tanks nearly dry: Diesel, the harbor’s most basic fuel, is very scarce.

Last week, East coast inventories of diesel plunged to the lowest seasonal level since government records started more than 30 years ago. The shortage caused a crisis in the diesel market, sending wholesale and retail diesel prices to an all-time high. Diesel is today more expensive in America that it was in 2008, when the price of crude oil surged to nearly $150 a barrel compared with little more than $100 currently. 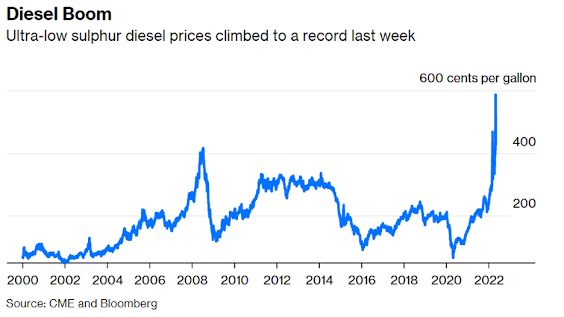 Diesel is the workhorse of the global economy. It’s used everywhere to keep trucks, tractors, freight trains and factories moving. And its ubiquity means the increase in its price will exacerbate global inflationary pressures.

From central bank interest rates to supermarket prices, a lot hinges on diesel. On Tuesday, average U.S. retail diesel prices posted the fifth-consecutive fresh daily record, surging above $5.3 per gallon, up nearly 75% from a year ago. The price spike is worse on the Eastern seaboard, where diesel retails now for more than $6 per gallon, nearly double 2021’s price.

Netflix Tells Employees Ads May Come by the End of 2022

Netflix could introduce its lower-priced ad-supported tier by the end of the year, a more accelerated timeline than originally indicated, the company told employees in a recent note.

In the note, Netflix executives said they were aiming to introduce the ad tier in the final three months of the year, said two people who shared details of the communication on the condition of anonymity to describe internal company discussions. The note also said Netflix planned to begin cracking down on password sharing among its subscriber base around the same time, the people said.

Last month, Netflix stunned the media industry and Madison Avenue when it revealed that it would begin offering a lower-priced subscription featuring ads, after years of publicly stating that commercials would never be seen on the streaming platform.

But Netflix is facing significant business challenges. In announcing first-quarter earnings last month, Netflix said it lost 200,000 subscribers in the first three months of the year — the first time that has happened in a decade — and expected to lose two million more in the months to come. Since the subscriber announcement, Netflix’s share price has dropped sharply, wiping away roughly $70 billion in the company’s market capitalization.

One of the benefits of reading is that it allows you to master the best of what other people have already figured out. This is only true if you can remember and apply the lessons and insights from what you read.

Reading the words on the page (or screen) is the easy part. We learned how to do this in elementary school. The problem is this is the only way we learned to read.

Tailoring how you read to what you read makes more sense. Not everything needs to be read with the same intensity. Some books only deserve a skim, while others deserve your complete attention. How much effort you put in relates to what you’re reading and why you’re reading it.

The Levels of Reading offer four different approaches to reading (from easiest to hardest). Most of our time will be spent between levels 2 and 3.

The single biggest change you can make to getting more out of the books you read is using the blank sheet method. Over the years I’ve tested multiple approaches and this one works best for simplicity and effectiveness — it will 10x your comprehension overnight.

Here’s how it works:

The blank sheet primes your brain for what you’re about to read and shows you what you’re learning. When you first start with a blank sheet, you’re forced to search your memory and put on paper what you know (or what you think you know) about a subject. As you read, you literally see that knowledge grow as you add new knowledge to the foundation. Often, you’ll even remove things you thought you knew.

Reviewing what you knew about a subject, as well as what you learned before a reading session not only improves memory and recall but helps connects ideas. Most of the early connections come from putting the authors’ raw material onto your foundation.

When in Rome: The Ancient History of Traditional Shaving

Despite our common view of our Stone Age ancestors having big, full, poorly maintained beards, they actually are the ones who started out our shaving journey. It is believed that Stone Age men started shaving 100,000 years ago by using clam shells like tweezers and pulling out their beard hair. About 60,000 years ago, man discovered shaving, and started using sharpened obsidian and clam shells to shave their beards.

Roman men took a liking to shaving with a passion, and Julius Caesar is reported to have had his beard hair plucked out with tweezers (which still sounds like a step forward from rubbing a pumice stone all over your face).

Young Roman men would celebrate their first shave with a party as a way to welcome in adulthood. The novacila was used for shaving, the pumice stone made an appearance again to help rub off stubble, and afterwards, massage oils and perfumes would be used to soften the skin.

Egypt is hot. Very hot. And living in that kind of heat with long hair can be particularly uncomfortable (as anyone with long hair in high summer already knows). According to Herodotus, all Egyptians, men and women, lower and upper classes, would shave their entire bodies from top to toe.

If this is the case, why don’t we see depictions of completely bald Egyptians in their art? Going completely bare-headed was considered to be a social faux pas, and of course, is not very comfortable with the desert sun beating down on your uncovered head. Having hair was still fashionable, just not very practical. So the Egyptians would craft fake wigs, and even beards, to wear.

Take a look at Ancient Greek busts, and you’ll see that beards abound. Greeks were extremely proud of their beards and put a lot of importance on them. They would only cut their beards during mourning periods, and if you lost your beard, it was considered shameful.

That all changed when Alexander the Great came along, though. He encouraged his soldiers to cut their beards so that they couldn’t be grabbed by the enemy if it came to hand-to-hand combat. Alexander’s influence quickly made shaving more fashionable, and razor technology took a leap forward. Shaving razors were soon made out of copper or iron and looked much closer to the straight razors we know today.