Cloud software index now back to just below pre-covid averages 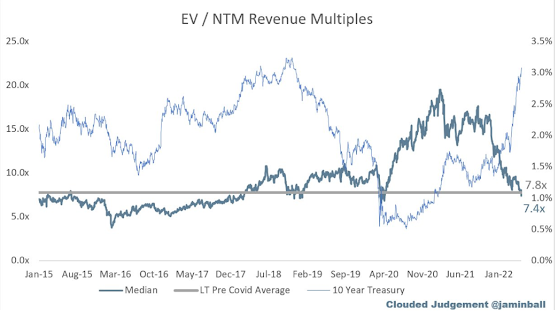 China meets banks to discuss protecting assets from US sanctions

Chinese regulators have held an emergency meeting with domestic and foreign banks to discuss how they could protect the country’s overseas assets from US-led sanctions similar to those imposed on Russia for its invasion of Ukraine, according to people familiar with the discussion.

The internal conference, held on April 22, included officials from China’s central bank and finance ministry, as well as executives from dozens of local and international lenders such as HSBC, the people said. The ministry of finance said at the meeting that all large foreign and domestic banks operating in China were represented.

They added that the meeting began with remarks from a senior finance ministry official who said Xi’s administration had been put on alert by the ability of the US and its allies to freeze the Russian central bank’s dollar assets.

The officials and attendees did not mention specific scenarios but one possible trigger for such sanctions is thought to be a Chinese invasion of Taiwan, which China claims as its territory and has threatened to invade if Taipei refuses to submit to its control indefinitely.

China’s cabinet vowed to stabilize the economy and moved to reassure financial markets, as the nation of 1.4 billion people battles a Covid surge that’s sent the business hub of Shanghai into a staggered lockdown.

A State Council meeting led by Premier Li Keqiang on Wednesday called on the nation to prioritize stable growth and avoid measures that harm market expectations. Contingency plans should be drafted to deal with possible greater uncertainties, it added, according to state broadcaster CCTV.

The cabinet acknowledged that downward pressure on the domestic economy was increasing but said China should stick to its annual economic growth target of about 5.5%.

China’s economy came under further pressure in March, as cities and provinces-imposed lockdowns and tightened Covid controls to contain infections. A deepening slump in the property market also continues to weigh on growth.

Top financial leaders committed earlier this month to easing regulatory crackdowns, support property and stimulating the economy through monetary policy. However, few concrete steps have been taken. Economists have pushed back their forecast of another cut in banks’ required reserves to the second quarter. A reduction in the interest rate on one-year policy loans is also expected in that quarter, a Bloomberg survey shows. 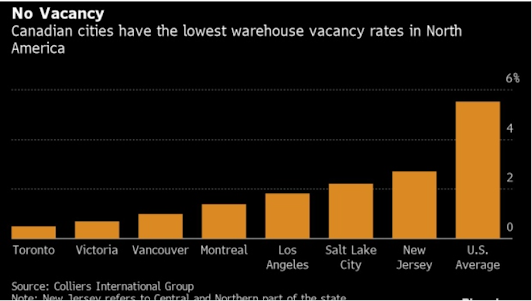 Finding warehouse space around Toronto has never been harder, and the e-commerce fueled shortage is disrupting businesses and threatening the broader economy.

With the pandemic driving a belated embrace of online shopping in Canada, Amazon.com Inc. has been gobbling up warehouses. That’s pushed the vacancy rate in the Toronto area down to just 0.5%, making it the tightest market in North America, if not the world.

Logistics consultant Richard Kunst is seeing the fallout first hand, as companies try to fill orders and move merchandise. One client, a food manufacturer, has been forced to pack roughly a third of its orders in a parking lot. Others are so desperate for warehouse space Kunst has advised they ask local farmers if they can keep goods in their fields.

“It’s cheaper to go to a farmer and say, ‘tell me how much you’re going to make off a crop on a five acre lot, and I will pay you that, plus 10%, in order to drop containers here,’” Kunst said.

While the warehouse shortage is most acute in Toronto, other major cities in Canada aren’t far behind, with Victoria, Vancouver and Montreal rounding out North America’s top four tightest warehouse markets, according to real estate brokerage Colliers International Group Inc.

The single biggest driver of this squeeze has been Amazon.com. The pandemic has seen the e-commerce giant increase its logistics footprint by nearly 12 million square feet across nine major Canadian markets since the end of 2019, according to Colliers.

That includes taking a quarter of all the space that came up for lease in Toronto last year, while boosting its footprint 10 times in Montreal and quadrupling in Ottawa.

With new warehouse supply lagging the soaring demand, the brokerage CBRE has predicted Canada could run out of space entirely by the end of the year. That’s starting to raise alarms that Canada’s overall economy could be dragged down, just as it starts to recover from the pandemic.

On the long list of movies that don’t get made anymore, the romantic comedy is typically at the top. In technical terms, this isn’t strictly true; as the mid-budget film has been driven out of the multiplex to free space for blockbusters and IP, it’s found a foothold on streaming services eager for couch-friendly content. The Netflix rom-com is practically a category unto itself, delivering standbys like Set It Up, To All the Boys I’ve Loved Before, and Always Be My Maybe. This past Valentine’s Day, viewers had their pick between I Want You Back, on Amazon Prime Video, and Marry Me, the Jennifer Lopez vehicle that paired its theatrical run with a day-and-date release on Peacock.

But even as the romantic comedy survives, it’s dwindled from its peak. That heyday is typically associated with established celebrities like Julia Roberts or Sandra Bullock and the star vehicles built on their proven appeal. (Today, Bullock’s The Lost City is a charming throwback; in 1998, it’d be just another week at the box office.) Yet the most financially successful rom-com of all time—the film that draws the greatest contrast between the genre’s past as a cultural juggernaut and its present as a sweet diversion—didn’t have a single star in its cast. It wasn’t produced by a major studio. It never even hit no. 1 at the box office, despite spending five months playing in wide release. At the time, the stupendous success of My Big Fat Greek Wedding was extraordinary. Today, it’s practically unthinkable.

“The story was to be told through Ian and Toula’s eyes, but it was about the family—the smothering, ever-suffocating, loving family,” Vardalos tells The Ringer. Because the conflict was largely internal, she felt free to cut down on more conventional, external sources of strife. “I wanted very, very much to not follow the standard romantic comedy formula of ‘he cheats on the girl and wins her back,’” she explains. “I didn’t want them to break up, because the only villain in the screenplay was the world against Ian and Toula.”

Structural quirks aside, My Big Fat Greek Wedding nonetheless became the high-water mark for the romantic comedy as a commercial force, eventually grossing more than $350 million worldwide on a $5 million budget. The film’s triumph wasn’t entirely commercial; Vardalos received an Academy Award nomination for the screenplay alongside such luminaries as Todd Haynes, Alfonso Cuarón, and eventual winner Pedro Almodóvar. Greek Wedding would ultimately yield a short-lived sitcom on CBS, which fizzled after just seven episodes, and a sequel in 2016, to modest success. (The premiere was sponsored by Windex.) The extended afterlife wasn’t what anyone anticipated when My Big Fat Greek Wedding first hit theaters, 20 years ago today.

After an hour-and-a-half bus ride last November, Julia Monterroso arrived at a white Art Deco building in West Hollywood, just opposite a Chanel store and the Ivy, a restaurant famous for its celebrity sightings. Monterroso was there to see Brennan Spiegel, a gastroenterologist and researcher at Cedars-Sinai who runs one of the largest academic medical initiatives studying virtual reality as a health therapy. He started the program in 2015 after the hospital received a million-dollar donation from an investment banker on its board. Spiegel saw Monterroso in his clinic the week before and thought he might be able to help alleviate her symptoms.

Monterroso is 55 and petite, with youthful bangs and hair clipped back by tiny jeweled barrettes. Eighteen months earlier, pain seized her lower abdomen and never went away. After undergoing back surgery in September to treat a herniated disc — and after the constant ache in her abdomen worsened — she had to stop working as a housecleaner. Eventually, following a series of tests that failed to reveal any clear cause, she landed in Spiegel’s office. She rated her pain an 8 on a 10-point scale, with 10 being the most severe.

Chronic pain is generally defined as pain that has lasted three months or longer. It is one of the leading causes of long-term disability in the world. By some measures, 50 million Americans live with chronic pain, in part because the power of medicine to relieve pain remains woefully inadequate. As Daniel Clauw, who runs the Chronic Pain and Fatigue Research Center at the University of Michigan, put it in a 2019 lecture, there isn’t “any drug in any chronic-pain state that works in better than one out of three people.” He went on to say that nonpharmacological therapy should instead be “front and center in managing chronic pain — rather than opioids, or for that matter, any of our drugs.”

Virtual reality is emerging as an unlikely tool for solving this intractable problem. The V.R. segment in health care alone, which according to some estimates is already valued at billions of dollars, is expected to grow by multiples of that in the next few years, with researchers seeing potential for it to help with everything from anxiety and depression to rehabilitation after strokes to surgeons strategizing where they will cut and stitch. In November, the Food and Drug Administration gave authorization for the first V.R. product to be marketed for the treatment of chronic pain.