We're hiring!
We're always looking for talented people who can help us achieve our goals and we understand that extraordinary human ability is a scarce resource in high demand. If you think you've got some and are interested in our company, please send your resume to: WeAreGrowing@EdgePointwealth.com.
Current opportunities:
This Week in Charts
Screening at Canadian Airports 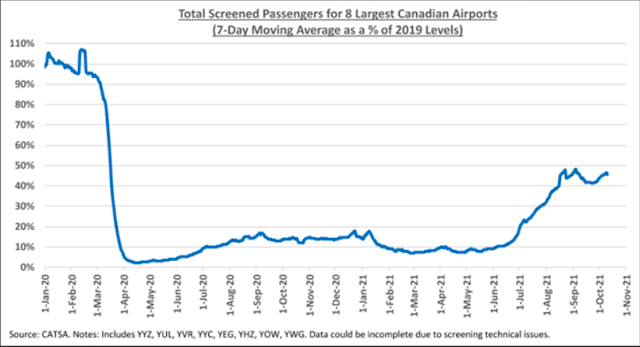 Japan’s carbon goal is based on restarting 30 nuclear reactors
Japan’s goal of reducing carbon emissions by 46% by 2030 is based on the assumption it will restart 30 of its nuclear reactors, a top ruling party executive said.
Akira Amari, secretary-general of the Liberal Democratic Party, made the remarks Sunday in a televised debate broadcast by NHK ahead of the Oct. 31 general election.
The LDP has also been promoting the idea of building small modular reactors, saying they are safer than Japan’s existing atomic plants. Amari said Japan was in a particularly difficult situation in meeting carbon targets because it has no power links with other countries and doesn’t have reliable prevailing winds.

Is it an investment? Is it a game? No, it’s eToro

The internet, cryptocurrencies, user-friendly trading platforms, and a pandemic-induced glut of spare time have gelled into a perfect storm that has redesigned retail trading as something that feels more like a game, and has transformed social-media friendly investors into quasi-influencers.

Israeli trading platform eToro, which launched in 2007, has been pioneering what the industry calls “social trading” features for over a decade. Users on the platform can follow other traders, check out their performances over time and, if they are keen, copy them. The most copied popular investors are rewarded by eToro with perks and a monthly payment.

As the world’s health conditions deteriorated – to wit: during the Covid-19 pandemic – more and more people popped up on eToro. In the first quarter of 2021, the platform gained more than three million new users, passing 20 million global users in June 2021. “I do see it increasingly among the younger generations: they have a sort of ‘don't care’ attitude towards losing their money, towards investing in risky things,” Smith says. “This meme culture and joking about their investments – I think it's gonna be a strange future, but I'm excited for it as well.”

Inconvenient Truths
In 2020, U.S. natural gas prices hit the lowest levels since the mid-1990’s, driven by the emergence of advantaged shale gas basins, the overcapitalization of the shale oil industry, and a short period of disequilibrium while incremental demand from LNG and chemical plants came online. Fifteen months later, prices are at their highest seasonal level since 2008 as associated gas from shale oil has declined and as global demand for gas causes U.S. LNG facilities to run at full capacity. So much for “perpetual sub-$2.50 gas.”
While prices and availability will normalize over time, the current environment exposes a number of realities which run counter to conventional wisdom and highlight the risks of allowing politics and ideology to interfere with scientific debate and economics. Specifically, there are three interrelated topics that deserve special consideration:
It Don't Come Easy - The Energy Crunch, Decarbonization Goals, Forecasts, And Putin
Given all the talk lately about ESG, decarbonization, and the rise of renewables, it may come as a surprise to learn that the U.S. Energy Information Administration’s (EIA) reference- or base-case forecast for global energy sees substantial increases in natural gas supply and demand over the next three decades.
In that report, which was released earlier this month, the agency said that under its base case — and (importantly) “absent significant changes in policy or technology” — global annual energy consumption will increase by nearly half (to just under 900 quadrillion Btu, or qBtu) by 2050.
With that caveat about the base case in mind, EIA said that demand for petroleum and other liquid fuels will grow by 36% by 2050 and remain the world’s largest primary energy source. EIA’s base case sees energy-related CO2 emissions increasing to well over 40 billion MT/year by 2050 (left graph). That doesn’t sound much like decarbonization.
Putin’s Fools Rush In
Earlier this week, Ursula von der Leyen descended from on high, tablets in hand, to deliver a somber message to the shivering masses of the Old Continent. According to euronews, von der Leyen has grave concerns about the energy crisis currently befalling Europe.
To believe von der Leyen, Europe’s energy conundrum is an immaculate crisis, conceived without any consummation by the European elite. They just woke up one day to find they were importing 90% of their natural gas needs. That Russia now controls their energy future is nothing more than a random and unfortunate event beyond anybody’s control. With no rooms left in the inn, Europe will just have to settle for Putin’s manger.
Better still is her proposed solution to this newfound shortage of baseload power. According to von der Leyen, what Europe needs now isn’t a rejuvenation of its fledgling nuclear power industry, nor systematic investment in domestically produced natural gas. Instead, Europe needs more intermittent power! There’s a hurricane coming, and Europe needs to board up its windows. No hammers, you say? Quick! Buy more saws!
Inflation 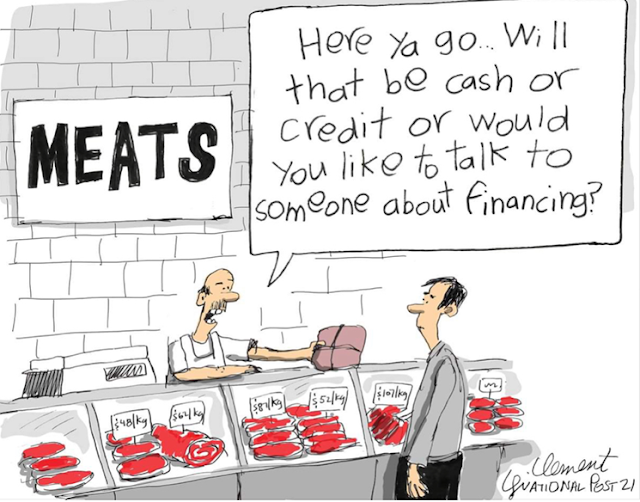 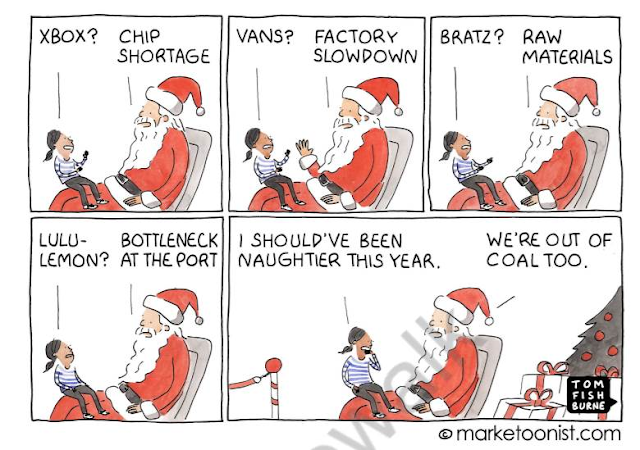 Posted by EdgePoint at 2:16 PM