Some profitable companies would still pay no taxes under Democrats’ plan

The Democratic proposal approved this month by the House Ways and Means Committee would sharply raise taxes on U.S. corporations, and business groups are working hard to defeat it. The legislation would increase the top corporate tax rate to 26.5% from 21%, and remove many benefits of booking profits in low-tax foreign countries.

The bill, however, doesn’t touch the main reasons why profitable companies sometimes don’t pay taxes, including accelerated depreciation of investments and tax credits for activities such as research and development.

The legislation also expands tax credits for clean energy and low-income housing in ways that could allow some companies to move from paying little to paying nothing.

The bill moving through Congress represents an explicit choice by Democrats to tolerate some zero-tax companies and steer tax advantages to companies that engage in favoured activities. 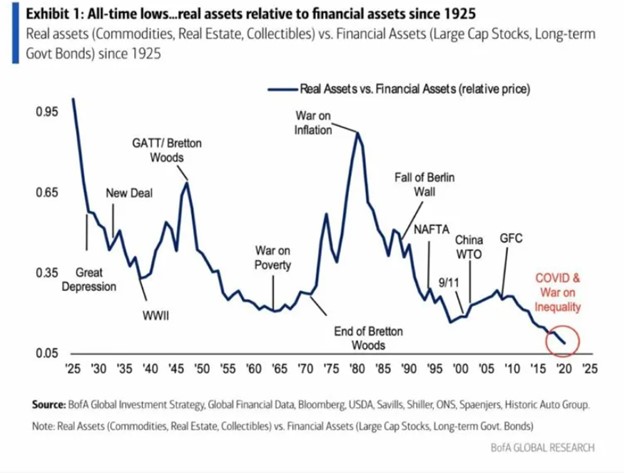 When the levee breaks…

To a man with a hammer, every problem looks like a nail. To the Federal Reserve, every problem is met with more liquidity. Unfortunately, the Fed has little control of where this liquidity goes. First, it went into equity markets, fueling an outright equity bubble. Then it overflowed into private equity and venture capital, creating demons there as well. Then it overflowed into “meme stonks” Not satisfied with the damage wrought on the financial economy, liquidity began overflowing into the real economy. There’s currently an epic housing bubble that’s leading to increasing wealth inequality and polarization.

Now, this liquidity is overflowing into the everyday economy—assuming you can even find the item you seek. In the past, only hard money zealots complained about the gradual creep of inflation—today, everyone feels it and has their own story. Everyone is painfully aware that inflation is present and likely to stay.

Climate-focused investment funds are undermining the fight against global warming by routinely engaging in greenwashing, academic research suggests. Worse still, these ETFs keep capital away from sectors that are actually at the heart of the transition to a cleaner economy.

“Since considerable investment is necessary to ensure electrification of the economy and decarbonisation of electricity, underfunding of this sector in climate-aligned benchmarks, which can correspond to a reduction in capital allocation of up to 91 per cent, would constitute the most dangerous form of portfolio greenwashing,” said Felix Goltz, co-author of Doing Good or Feeling Good? Detecting Greenwashing in Climate Investing.

“The key issue is not how to restrict investment in these industries, but rather, how to make sure that these industries invest in technology that allows them to produce needed goods and services with minimum release of greenhouse gases,” he argued.

The findings come as investors have poured money into funds that claim to improve the world. The assets of self-proclaimed “sustainable” funds tripled between the end of 2018 and mid-2021 to $2.3 trillion, according to data from Morningstar. 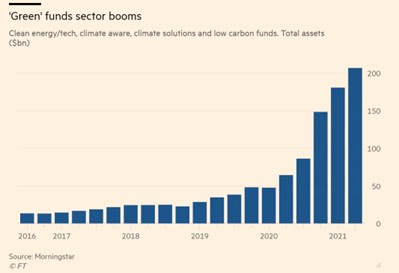 Belize leans on coral reefs to drive bargain with bondholders

Belize is inching towards a deal with international bondholders after admitting it cannot afford to pay back its debt, and is counting on an unusual asset to help: its coral reefs.

Earlier this month the Caribbean nation, with its tourism-heavy economy ravaged by the pandemic, agreed to buy back its only international bond from investors at a huge discount, using cash lent by the Nature Conservancy, a US-based environmental group. As part of the deal, Belize will pre-fund a $23.4m endowment to support marine conservation projects on its coastline, home to the world’s second-largest barrier reef

If Belize can achieve the approval it needs on this $530 million bond, the country could secure the first green-tinged debt restructuring, capitalizing on the hunger among big fund managers to demonstrate their commitment to environmental, social and governance-driven investing.

Investors and advisers believe the agreement could serve as a template for future restructuring talks, in which cash-strapped nations use the promise of environmental conservation to drive a harder bargain — in effect creating a mechanism for investors in rich countries to pay poorer nations to protect the natural world.

Podcast: Dan Wang explains what China's tech crackdown is really all about

Over the last several months, Chinese authorities have undertaken a sweeping campaign of change. We've seen crackdowns on big tech and fintech companies (like Ant Financial and Didi), online education companies, and now even the playing of video games. Investors in key sectors have been clobbered by these new rules.

Posted by EdgePoint at 2:18 PM