Correlation of yields and styles 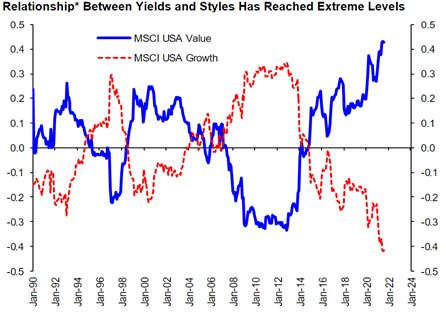 Producer Price Data (PPI) as a measure of inflation

Unlike the CPI report, producer price data surprised to the upside. The Producer Price Index (PPI) is a measure of inflation based on input costs to producers. 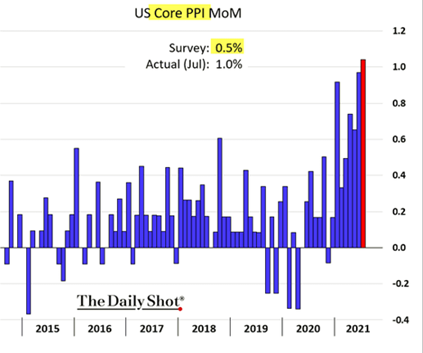 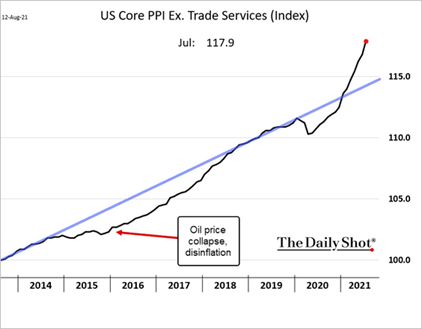 Is Inflation Here to Stay?

The August 1979 BusinessWeek issued a magazine with cover line “The Death of Equities — How Inflation is Destroying the Stock Market” in which it outlined how inflation would depress equity returns for a generation of investors. 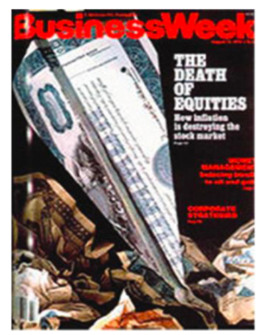 In retrospect, this was probably the worse market call ever made.

The funny aspects of business magazine cover stories is that in the short term they are perceived to be correct. It was not until August 1982, three years after the publication of the BusinessWeek article that investors suddenly recognized the financial landscape had dramatically changed. The stock market exploded off the bottom on August 17th and never looked back.

Two years have passed since BusinessWeek/Bloomberg’s 2019 “Is Inflation Dead?” piece and we believe we are rapidly approaching inflation’s inflection point. 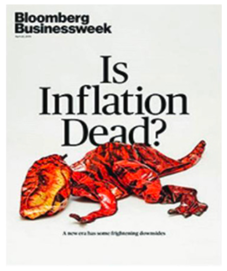 o  Over the last year, the US government has borrowed and spent $2.4 trillion to replace $800 billion of lost economic activity resulting in a US savings glut of nearly $1.5 trillion. Not content with the massive surge in government spending, the Biden administration is proposing an additional $3 tr in stimulus spending.

o  With the economy now starting to recover, the press is filled with stories of shortages that have developed in countless markets from lumber to semiconductors to restaurant workers to ketchup packets.

• From farm to bottler to supermarket cooler, a liter of Coca-Cola creates 346 grams of carbon dioxide emissions, the company’s data show. That’s less than half the tree-to-toilet 771-gram carbon footprint of a mega roll of Charmin Ultra Soft toilet paper, as measured by the Natural Resources Defense Council, an environmental group.

• Math like this is fast becoming obligatory. Investors are increasing pressure on businesses to disclose the emissions of greenhouse gases related to their products and services. Regulators are starting to ask about that, too. Within the next couple of years, every public company in the U.S. might well be required to report climate information.

• Nearly a third of the companies were deemed ESG leaders by one or more rating firms, but labeled ESG laggards by one or another rater. Credit ratings, by contrast, are broadly consistent. 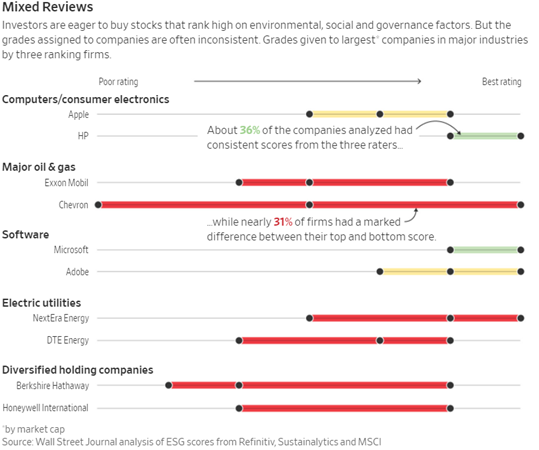 • Americans may be richer than they think and less unequal than they’ve been led to believe.

• There are strong reasons to include pension and Social Security guarantees in wealth calculations. Most workers forfeit 12.4% of their income annually in payroll taxes in return for Social Security payouts starting in their 60s, but that wealth is ignored in standard inequality measures.

• In the 40 to 59 age group that is the paper’s focus, the top 5% of households control 63.5% of “market wealth”—liquid assets, housing, and accounts like 401(k)s. But include future pension and Social Security income, and the top 5% share is a more modest 45.4%, the authors find.

• Some claim this was the market’s acting as a forward-looking indicator showing the housing market is going to crash. This one doesn’t pass the smell test. Other housing-related stocks are crushing it this year.

• Another theory was that this is a housing boom in price only. This makes sense considering how low inventory levels are. On the other hand, part of the reason for this is houses are flying off the shelves. Existing home sales are higher than they’ve been in a long time.

• If it’s not the industry and it’s not a company that’s falling out of favor the next logical guess would be valuation. This is an argument that seems to hold water. The price to sales ratio was well over 13x in the February blow-off top, twice the average over the past 5 years.

There are a number of stocks with similar return profiles. Stocks that are still up a lot from the lows of the Corona crash, despite being down a lot from their highs.

We would all like for there to be a simple explanation for complex topics like the movements of stocks in the short run. But most of the time these price moves are random, an amalgamation of emotions, differing opinions, expectations and momentum.

Posted by EdgePoint at 3:49 PM