Investors in a $15bn exchange traded fund are being warned to brace for a major rebalancing at the end of May that could see a number of major holdings removed.

iShares MSCI USA Momentum Factor ETF is currently heavily weighted to growth stocks in the broader information technology sector, which accounts for 42% of assets. Amazon, which currently accounts for 4.6 % of the portfolio, could be removed altogether. This ETF currently has minimal exposure to traditionally value-oriented financials, at 1.5% and no energy sector holdings at all. In a sign of the market rotation, energy companies such as Occidental Petroleum and Valero Energy, which have more than doubled in value over the past six months, are likely to be added. Other stocks at risk of ejection from this ETF include Costco Wholesale, Netflix and Nike.

CARBIOS a company pioneering new bio-industrial solutions to reinvent the lifecycle of plastic and textile polymers, and MICHELIN, a leader in sustainable mobility, have taken a major step towards developing 100% sustainable tires. Michelin has successfully tested and applied Carbios’ enzymatic recycling process for PET plastic waste, in order to create a high tenacity tire fibre that meets the tire-giant’s technical requirements.

Crypto vs. Fiat, and why newer isn't always better

While opinions vary on Bitcoin, we have seen particularly enthusiastic endorsement emanating from the technology/software industry, including many high-profile industry figures. Some Silicon Valley companies like Square and Tesla have purchased Bitcoin at the corporate level, and Paul Graham even went as far as likening Turkey's recent crypto ban to banning the microprocessor in 1976. To these folk, Bitcoin is obviously the way of the future. This zeitgeist recently prompted someone to ask on Twitter, why are so many intelligent & capable software people so quick to embrace Bitcoin and the "future of money" with little in the way of critical thinking and only a cursory understanding of the issues?

The answer, I believe, is that these folk have - based on many decades of experience - a strong predisposition to believe that anything that is both *new* and *digital* must be superior to prior "old world" solutions.

Instead of uncritically embracing the hype, let's take a step back and think through the issues. There are really only two potential applications/needs cryptocurrency might hope to fulfil, aside from functioning purely as instruments of speculation:

(1) to function as a currency/means of exchange/payment, displacing/acting as a (superior) alternative to fiat currencies; and/or

(2) to function as a "store of value". The default presumption is that - owing to putative problems/shortcoming associated with fiat currency (some true, some imagined) - Bitcoin et al are unquestionably superior - indeed a natural evolution towards next-generation solutions.

Unfortunately, the reality is a lot more complicated than that.

How high could prices go? It's anyone's guess, because prices are driven purely by demand and supply, and demand is partly a function of price increases. However, the total amount of global wealth was estimated by Credit Suisse to be some US$360tr at 2019 year-end 1. It has probably increased since then - let's say to US$400tr. The total market cap of crypto, at some US$2.0tr, is therefore now already about 0.5% of total global wealth.

Could it go to 5%? Anything is possible. History cautions against trying to call the peak of human speculative excess - things can be taken to utterly unimaginably absurd extremes. But in the long run, I must say it is very difficult for me to imagine crypto settling out even at 2.5-5% of total global wealth levels, let alone anything higher. US$2tr in combined market cap also also represents about US$250 per global capita - including children and people from less developed countries in Africa etc. There is still room to run further in the short term - there always is - but on the long sweep of things I wouldn't be investing today with the expectation of making 100x your money.

I used to believe Bitcoin would likely eventually go to zero. I no longer believe that. My prediction now is that we see repeated waves of speculative excess - huge giddy run ups, followed by spectacular collapses; long periods of disinterest/sideways action; and then renewed eco booms. People will always like to speculate, and the smaller the market cap gets after any bust, the less buying will be required to support and push up the price. After a bust, at some level the price will get low enough for a number of people to step up to the plate and bet on another boom that windfalls them 20x. And the cycle will repeat. It doesn't make a lot of rational sense, but then again nor does Vegas.

Posted by EdgePoint at 4:49 PM

Some financial advisors and investors are wrestling with the standard portfolio known as “60/40”. For years it was a go-to for investment assets: 60% equities, 40% fixed income. A diversified basket of stocks gives you growth potential, and the bonds give you safety and ballast.

These days, though, you don’t hear as much about this old financial rule of thumb. In fact some market observers have called the idea “no longer good enough,” “leading investors over a cliff,” or even “dead” altogether.

When bonds used to pay 6-8% and interest rates were falling, the 60/40 model worked great. But as they say, past performance is no guarantee of future results, and that is especially true with the 60/40 portfolio. The 40% (bonds) which is supposed to reduce risk is now fraught with interest-rate risk, and if interest rates rise, the bonds will go down in value.

E&P spending in the US - It's still not coming back

Producers have historically put the brakes on capital spending when commodity prices fell, then stomped on the accelerator like a race car heading into a straightaway when prices rose. But recently unveiled 2021 budgets for many E&Ps suggest that, even with the rebound in prices, they are maintaining a conservative investment paradigm that highlights strengthening balance sheets and rewarding shareholders at the expense of rapid production growth.

Here’s the latest sign of the great U.S. gasoline comeback: For the first time since the pandemic started, driving on the nation’s highways is higher than at the same time in 2019. 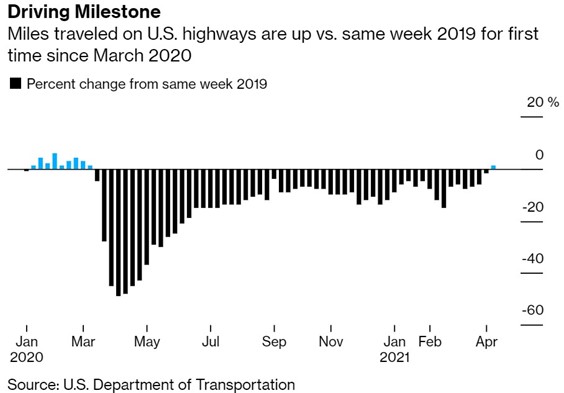 Overall US ecommerce penetration has not actually settled very far from the underlying trend line in the past year.

Tech, a big ESG overweight, isn’t all that green

Technology is one of the most over weighted sectors by ESG funds, but we find it has some of the highest indirect emissions among service industries. 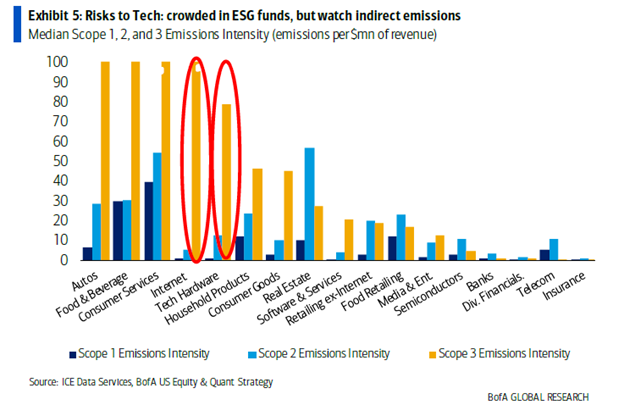 $1 billion in Bitcoin purchases is equal to 1.2 million cars driven over the course of a year 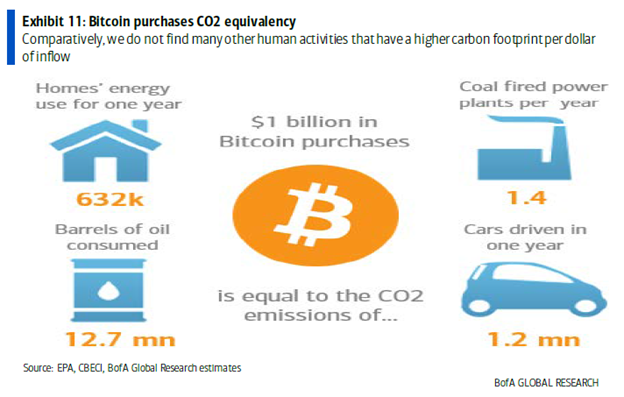 Posted by EdgePoint at 5:52 PM

This quarter, investment analyst George Droulias looks at why 2020 truly was a year to forget from an investment perspective.

This quarter, portfolio manager Frank Mullen discusses how the Investment team not only uncovers undervalued investment opportunities, but also makes active choices to avoid lending to many businesses and areas of the market where others may feel comfortable doing so. 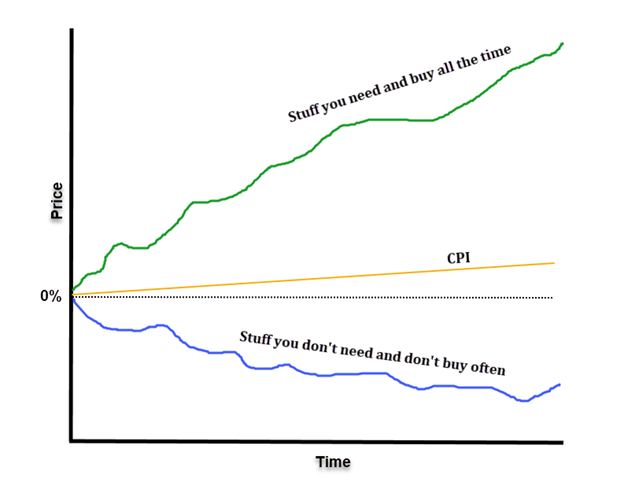 More pork in the basket? 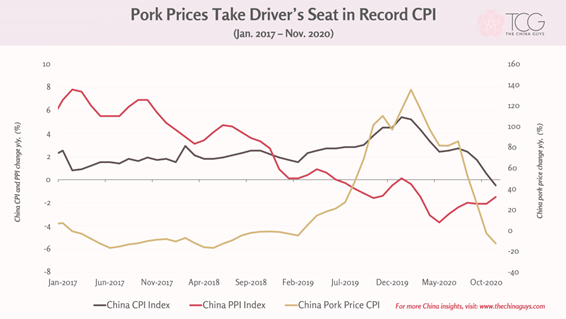 Steepest cost pressures since 2008
Inflationary pressures have risen worldwide to the highest level in at least a decade as a surge in demand is accompanied by widespread supply constraints in the provision of goods and services. The survey data points to a steep rise in consumer price inflation across the world in coming months, most notably in the US, where prices charged for consumer goods rose sharply. 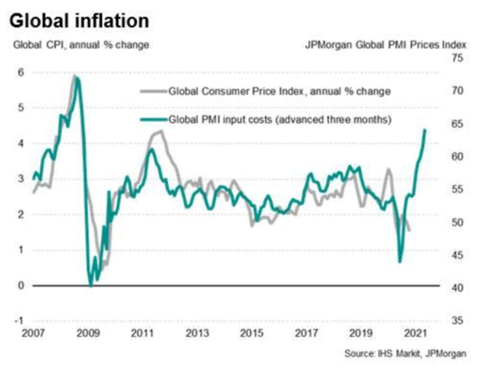 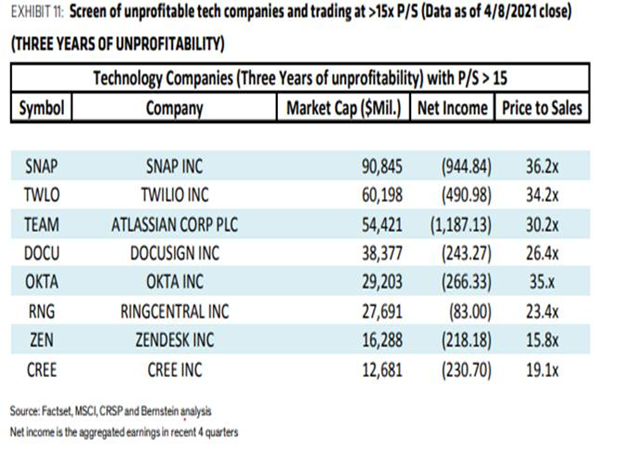 Desperate reach for yield
With the fed promising not to raise rates for a few more years investors are becoming increasingly desperate for yield. That desperation has pushed High Yield credit spread to 3.22%, approaching the lowest level in the last 10 years (3.16% in October 2018). 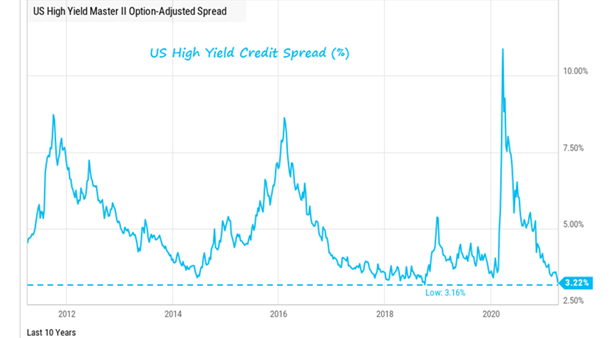 We're always looking for talented people who can help us achieve our goals and we understand that extraordinary human ability is a scarce resource in high demand. If you think you've got some and are interested in our company, please send your resume to: WeAreGrowing@EdgePointwealth.com.

Currently, we are looking to hire a Product Manager

As of late February, investors had borrowed a record $814 billion against their portfolios. That was up 49% from one year earlier, the fastest annual increase since 2007, during the frothy period before the 2008 financial crisis. Before that, the last time investor borrowings had grown so rapidly was during the dot-com bubble in 1999. 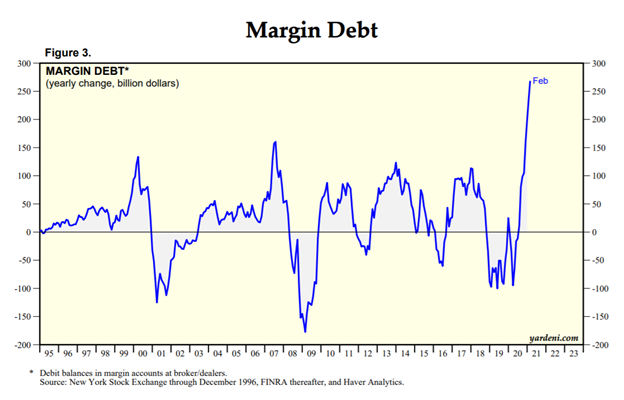 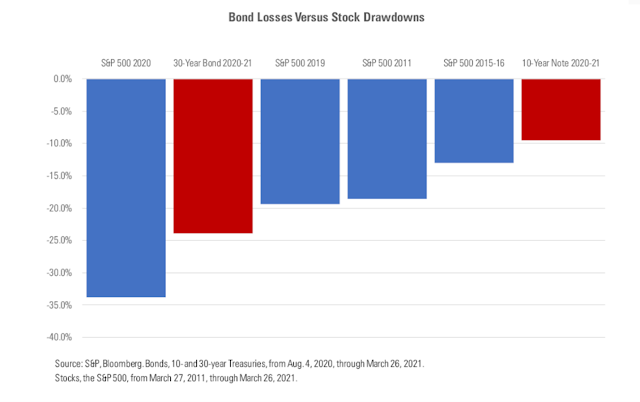 The repatriation of demand by the Chinese 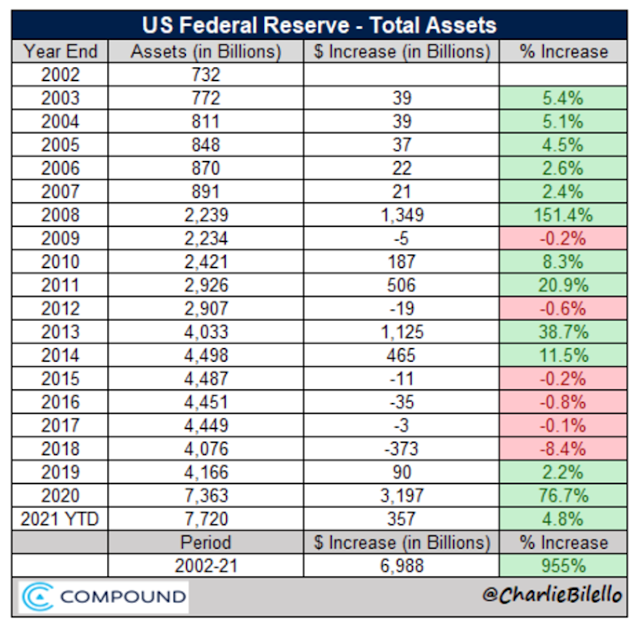 The earnings yield of global tech stocks is now below the 10-year Treasury yield. 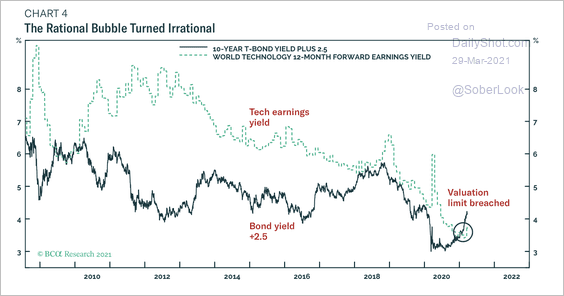 Posted by EdgePoint at 4:45 PM

From our Cymbria Annual Report: 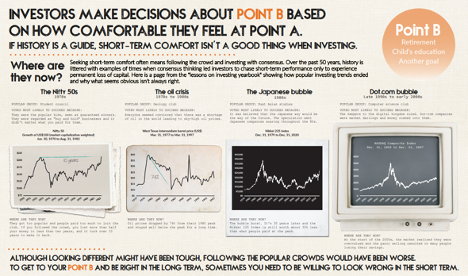 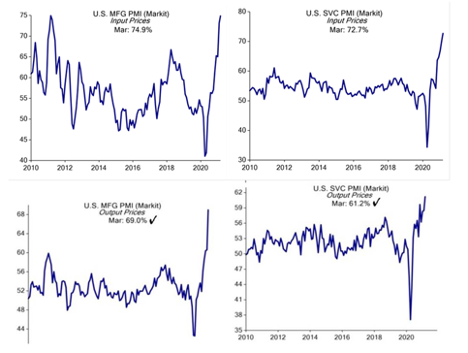 The survey said supply chain disruptions were the main cause, and the green line below shows that supplier delivery times increased too, but the speed of the increase in input and output prices is off the charts (not literally, but getting there). 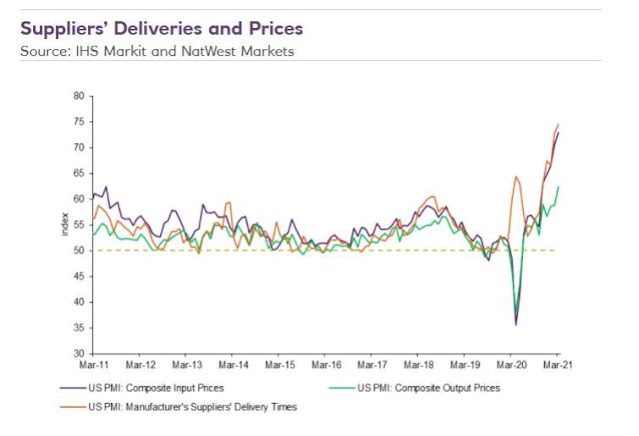 The upturn in new business accelerated, with new export orders rising solidly. Restrictions on production, however, meant that backlogs of work were accumulated at the steepest pace since data collection began in May 2007. Although manufacturers expanded workforce numbers at a strong rate, the pace of job creation eased slightly as many firms highlighted struggles finding suitable candidates to fill vacancies. Amid substantial supplier shortages and input delays, manufacturing firms registered the fastest rise in input costs in a decade in March. At the same time, firms sought to partially pass greater input prices through to clients, with the rate of charge inflation the sharpest on record.

Reports of ongoing supply chain issues led to marked hikes in input costs across the service sector during March. The rate of input price inflation was the sharpest since data collection began in late-2009. Firms were able to partially pass higher costs through to clients, however, as selling prices rose at the fastest pace on record. 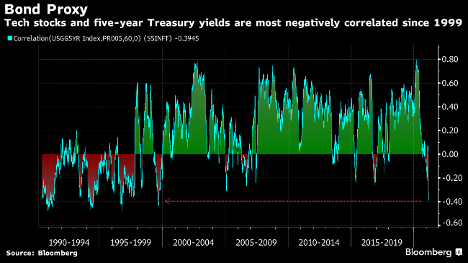 Too Much, Too Soon, Too Fast

Some things scale well. Double their size and you get double the output (or more). Other things don’t, andis it important to know which is which.

A good summary of investing history is that stocks pay a fortune in the long run but seek punitive damages when you try to be paid sooner. Virtually all investing mistakes are rooted in people looking at long-term market returns and saying, “That’s nice, but can I have it all faster?” Here’s how often the market generates a positive return based on holding period. 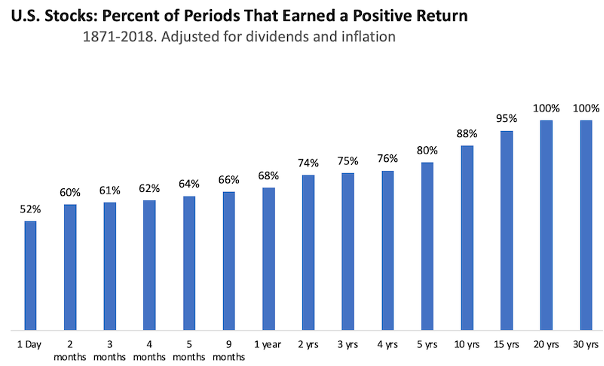 One way to think of this chart is that there’s a “most convenient” investing time horizon – probably something around ten years. That’s the period in which markets are nearly always to reward your patience. The more your time horizon compresses the more you rely on luck and tempt ruin.

Go down the list of investing blunders and I’m telling you, no less than 90% of them are caused by investors trying to compress this natural, “most convenient,” time horizon.

Posted by EdgePoint at 5:08 PM