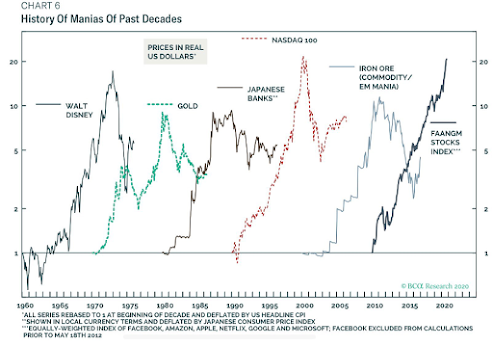 Source: @jsblokland
The US outperformance vs. other markets appears to be stretched 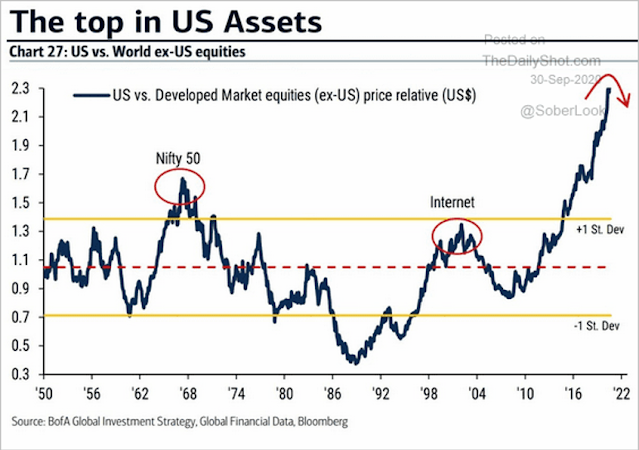 Source: BofA Global Research, @barnejek
FAANGs Risk Ending Up Like the Nifty Fifty
FAANGs have done very well, along with the rest of the technology elite. The Nasdaq 100 is up 30.5% this year, versus roughly 4% for the broad market S&P 500.
Nevertheless, at some point they risk turning out like the Nifty Fifty did. These were a collection of blue-chip, large-cap names that investors of the day labeled “one-decision stocks.” In other words, they tended to go up like helium, so one should automatically buy them as a sure thing. Sound familiar?
Eventually, a bunch of the Fifty tanked, with 20% in big trouble. They foundered in the vicious 1973-74 bear market and staggered through the stagflation 1970s. A number of its top performers back in the day are desiccated versions of their former selves, such as Eastman Kodak, Xerox, and Sears Roebuck, or are defunct, like ITT and Burroughs. Some, of course, are still in a strong position, notably Walmart.
A similar fate for the FAANGs would cleanse the equity market. That monumental a failure “would do a lot to sterilize the successful ones.”
Number of stocks up at least 400% at some point in the first nine months of each year
At their individual peaks in 2020, more than 60 stocks in the tech-heavy Nasdaq Composite had risen at least 400%. But the gap between the star performers and the losers is wide. Of the roughly 2,500 stocks in the index, more than 1,000 suffered declines of at least 50% for the year at their low points. 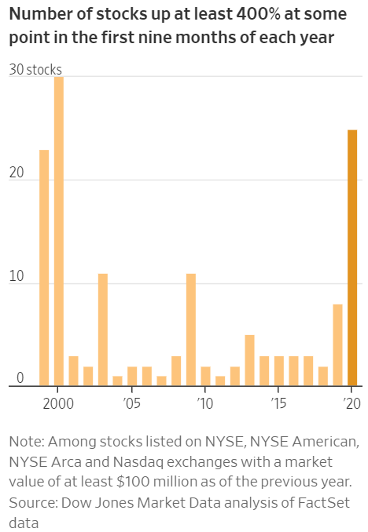 The S&P 500’s information-technology sector has the biggest weighting in the stock-market index than at any time since 2000. Meanwhile, financials and energy companies have steadily dwindled to the lowest levels since at least 1990. 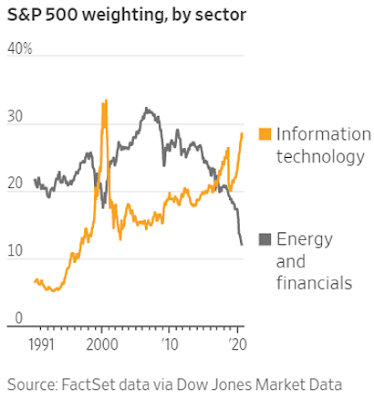 Uneven Recovery of U.S. Small Businesses
In the U.S. as a whole, data suggests that nearly a quarter of all small businesses remain closed. Of course, the situation on the ground differs from place to place. Here’s how cities around the country are doing, sorted by percentage of small businesses closed as of September 2020:

Posted by EdgePoint at 5:51 PM