EdgePoint Academy - Planning for retirement: Your retirement preparedness temperature check
Our retirement series concludes with a link to a retirement calculator to assess your own retirement preparedness and the key takeaways to remember from the series.
Inflation expectations vs. Treasury yields
Over the past 5 months, real yields have collapsed to all-time lows as inflation expectations rise and nominal yields remain relatively unchanged. Historically, market returns have been more highly correlated with change in nominal interest rates. 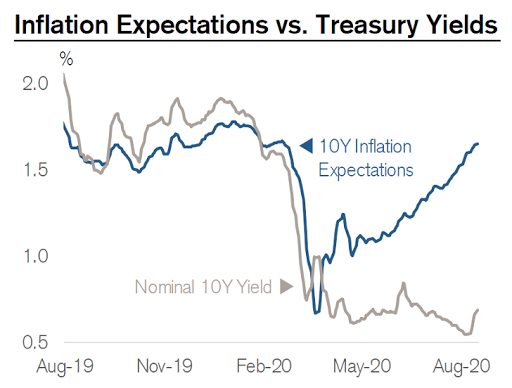 Mind-boggling stats
1. Apple has added $420 B of market cap over the last month, which is more than the current market cap of 493 companies in the SPX.
2. The market cap added by Apple just since reporting and announcing its stock split at the end of July is equal to the combined total market cap for the bottom 77 stocks in the SPX.
3. Apple alone is worth pretty much as much as the whole of German stocks…
4. It took them 38 years to get to 1 trillion market cap, and 8 months to add another 1 trillion. Normal.
5. 80% of outstanding bonds globally yield less than 1%.
6 Elon Musk founded / co-founded companies are now worth more than 500% of the total combined accumulated revenue of ALL of them. And NONE of them have ever had a profitable year.
7. Elon Musk net worth is greater than the cumulative revenues of ALL of his companies founded or co-founded by him while he was there… of course don’t ask about profits.
8. TSLA is now the 12th largest company in the world with a market cap of $383 B, sales of $24 B.
9. Since announcing its stock split on August 11, TSLA has added almost $200 B in market cap… or 5 FERRARIs or Fiat + Peugeot + Renault + BMW + DAI + VW. In 9 days!!!
10. FB, AMZN, AAL, MSFT, GOOG, now account for 23% of SPX well above the 18% high of the 2000s.
11. While the SPX closed at an all time high, every single sector in the US market had more decliners than advancers last week. All 11 sectors except tech…
12. US corporate bankruptcies (companies with assets > $1B):

13. 80% of outstanding bonds globally yield less than 1%.
Investors Have Been Making the Same Mistake for 300 Years
Early in August 1720, Sir Isaac Newton was faced with a choice. In a year when London’s stock market was roaring upward in an utterly unprecedented boom, should he sell the last of his safe investments to buy shares in the South Sea Company? Since January of that year, shares in the firm—one of the largest private companies in history—had gone up eightfold and had made paper fortunes for thousands.
Newton was usually a cautious investor. He did own shares in a few of the larger companies on the exchange, including South Sea, but he had never been a rapid or eager market trader. That had changed in the past few months, though, as he bought and sold into the rising market seemingly in the hopes of turning a comfortable fortune into an enormous one. It was a disastrous choice. Within three weeks, the market turned. By Christmas, it had utterly collapsed. Newton’s losses reached millions of dollars in 21st-century money.
The global financial system still breaks the same way it did 300 years ago. The dot-com bubble that collapsed from 2000 to 2002 and the real-estate bubble of 2007 and 2008 were part of a recurring pattern of boom, bust, and bankrupted people, institutions, and nations. Newton’s errors matter, because we’re still making them. Months into a deadly pandemic that has ravaged the world and thrown millions of Americans out of work, the crisis that sparked the Great Recession seems like a distant memory. Forgetfulness is only one of the reasons bubbles happen again and again.
The Swedish Investor
A collection of videos covering advice from the most successful money managers and investors of our time. You will find many investing/business/trading books summarized into short videos.
Posted by EdgePoint at 5:29 PM