Staying the course: Even stars are underdogs at times
Active portfolio management can be like riding a roller coaster at times. Even highly successful active managers often underperform over periods of time. 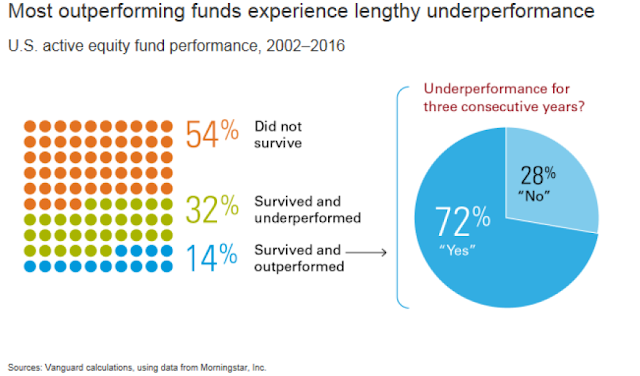 More than one study has shown that the vast majority of successful managers have at times failed to exceed their benchmarks or their peers, particularly over periods of three years or less. And they’ve sometimes lagged by a wide margin, Of course, it’s easy to lose confidence in an investment after suffering through a negative period but selling (or buying) purely based on short-term numbers is one of the worst things you can do as an investor.

Do yourself a favour – after picking the right investment for you, stay loyal. After all, the longer you stay in the game, the greater your chances of coming out ahead. Don’t replace one fund with another simply because it has underperformed lately. Invest in a fund because you believe in the investment approach and understand how it can help you in the long term.


The Ongoing Battle for Pipeline Projects in Canada
Canada has the world's 3rd largest oil reserves and is currently the 7th largest producer of crude oil.  Canada's crude oil production has increased from 2.3M barrels/day in 2005 to 4.6M in 2018. With the proper infrastructure built, the National Energy Board estimates the production will grow to 6M barrels/day by 2030. The critical question facing Canada's oil and gas industry is whether the necessary infrastructure will be built.

Over the last decade, many of the proposed pipeline projects have been cancelled or delayed as a result of regulatory challenges or political decisions. If all of the export pipelines applied for since 2012, which have now been canceled or delayed, were instead approved and completed as per their original proposed in-service dates, 3.4M barrels/day of additional capacity would have been added by 2019. Instead, between 2013 and 2016, only 1M barrels/day in additional capacity was added, and since 2016 no additional capacity has been added. This has contributed to a widening price differential for Western Canadian Select (WCS) compared to Western Texas Intermediate (WTI).

For a review of some of the most high-profile pipeline projects in Canada in recent history click here.

High flying
The combined value of the five biggest companies in the S&P 500 -Apple, Microsoft, Amazon, Alphabet, and Facebook -- has reached 17% of the index's total market cap. That's the highest for the top five companies in any week since the burst of the dotcom bubble at the turn of the century. 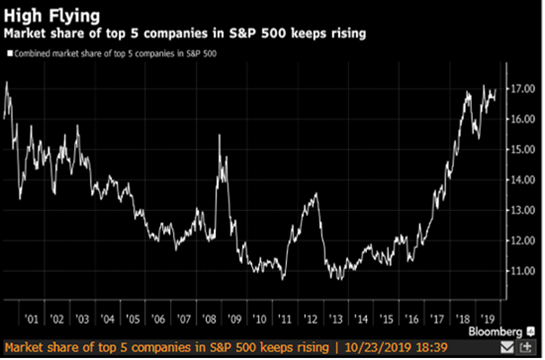 The percentage of companies going public that have yet to generate positive earnings has reached 70%. This is the highest since the peak of tech-industry excess roughly 20 years ago. 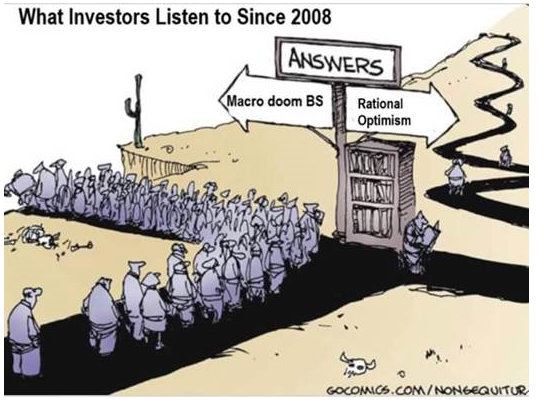 Posted by EdgePoint at 2:25 PM

When did you become an EdgePoint partner? Let's take a walk down memory lane as we recall the major events and fun facts from your vintage year. 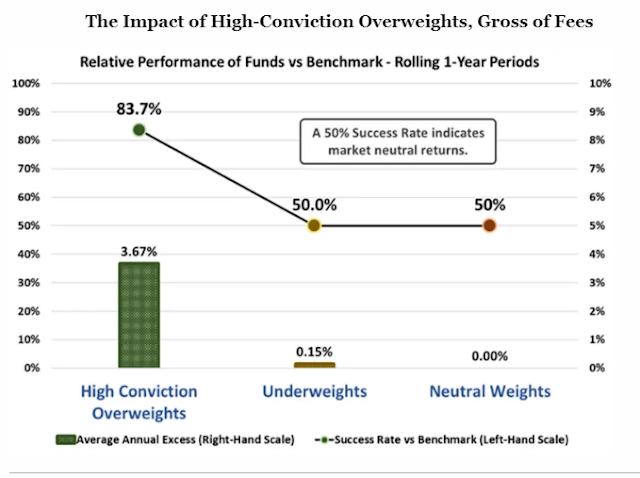 Negative interest rates are nothing short of a mystery


Negative interest rates are likely to throw off whatever we knew about the financial world and how things worked in the past. Howard Marks discusses why negative rates have become prevalent, what implications they might have, whether they will reach the U.S., and what investors can do as they navigate these uncharted waters.

Why would anyone want to buy a negative-yield bond?
• Fear about the future that causes investors to engage in a flight to safety in which they elect to lock in a sure but limited loss
• A belief that interest rates will go even more negative providing a profit on bonds when they do (as bonds appreciate in price as they would with any decline in rates)
• An expectation of deflation causing the purchasing power of the repaid principal to rise
• Speculation that the currency underlying the bond will appreciate by more than the interest rate

What is there to do?
The most reliable solution lies in buying things with durable and hopefully growing cash flows. Investments with the likelihood of producing steady earnings or distributions that reflect a substantial yield on cost seem like reasonable responses in times of negative yields. The challenge lies in accurately predicting the durability and growth of cash flows and making sure the price you pay allows for a good return. In today’s environment, assets with predictability are often priced too high and investors are unusually willing to extrapolate growth far into the future. While simple in concept, investing is far from easy, especially today.


Barely noticed in a corner of the financial markets, leveraged loans originally worth about $40 billion are staging their own private meltdown.

Loans tied to more than 50 companies have lost at least 10% of face value in just three months. Some have dropped a lot more, with lenders lucky to get back just two-thirds of their investment if they tried to sell.

In January this year Morgan Housel- Partner, Collaborative Fund- gave a presentation on behavioural biases and pitfalls faced by ordinary investors at the India Investment Conference. Through five stories and various examples, he conveys that investing is not just about what you know but also about how you behave and that stocks become less risky the longer one holds them.

“The goal of investing is not to minimize boredom, it is to maximize returns! If you want clients to stick around, then do things simply.”
Posted by EdgePoint at 10:19 AM

Our Q3 commentaries are available now

This quarter, portfolio manager Geoff MacDonald explains why it's important to invest like a rational business owner, while fixed-income analyst Derek Skomorowski discusses why relying on others to do your credit work doesn't pay off.

Car loans that are increasingly stretched out are a pronounced sign that some American middle-class buyers can’t afford a middle-class lifestyle. For many, the availability of loans with longer terms has created an illusion of affordability. It has helped fuel car purchases that would have been out of reach with three-, five- or even six-year loans. Low rates in effect served as a bailout for the auto industry over the last decade. 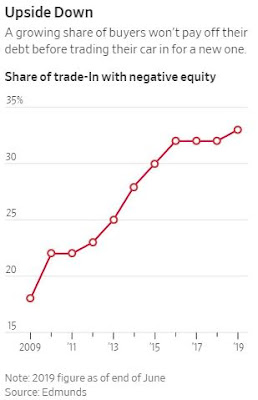 Americans have been borrowing to buy their cars for decades, but auto debt has swelled since the financial crisis. U.S. consumers held a record $1.3 trillion of debt tied to their cars at the end of June.

So far this year, dealerships made an average of $982 per new vehicle on finance and insurance versus $381 on the actual sale. 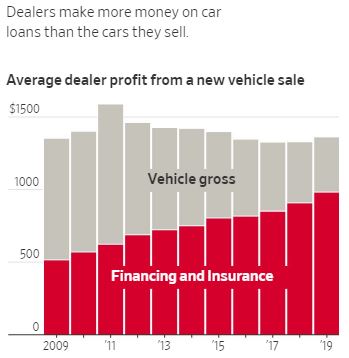 Momentum. After one year of outperformance, the next 9 are usually bad
Momentum strategies show a tendency towards long-term reversal. Starting from around the one year point onward, they underperform. The green column shows the initial one-year annual excess returns of Winner portfolios over Loser portfolios. The blue column shows the excess returns of those same portfolios from the end of the 1st year to the end of the 10th year. 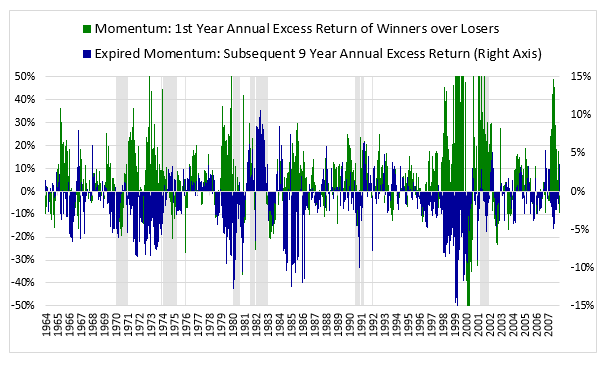 Free cash flow as a % of GDP is at a record high in the U.S.

There have NOT been big investments by either households or businesses that create misallocations of capital.  Misallocations usually precede/cause a recession. 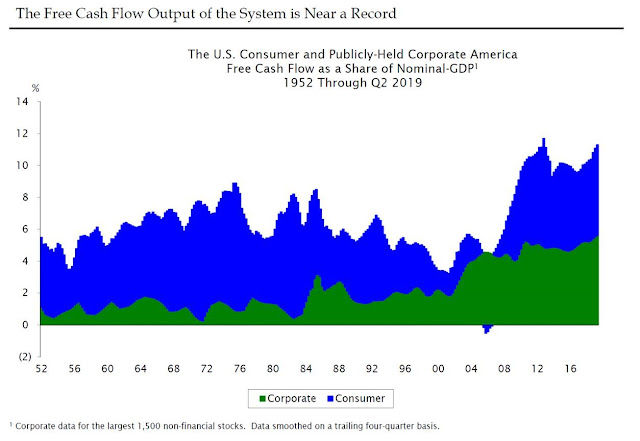 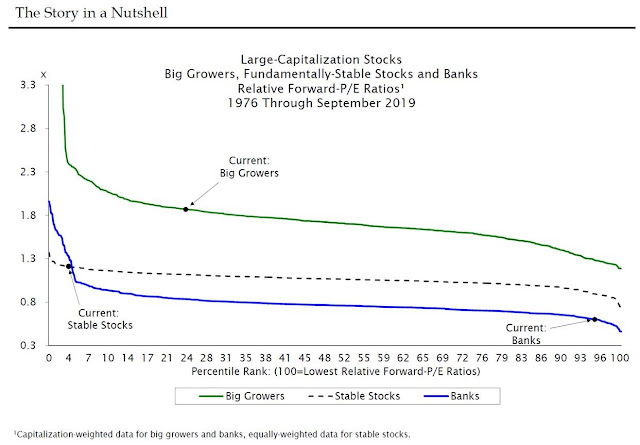 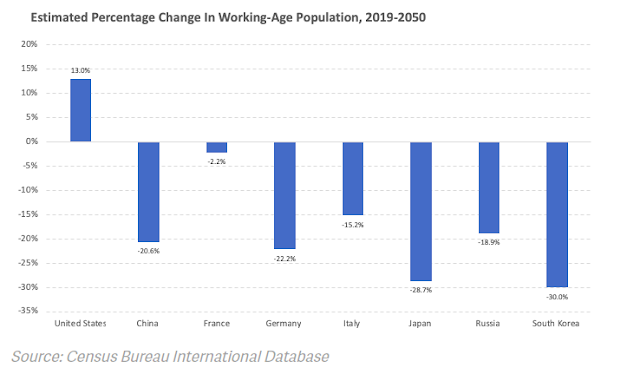 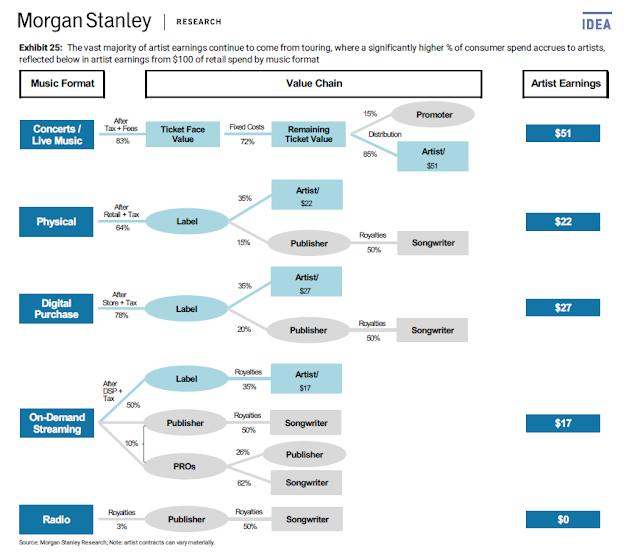 …unless you can take a photo of it like this spectacular shot. Our Q3 Photo Contest winner is Ted Chisholm. 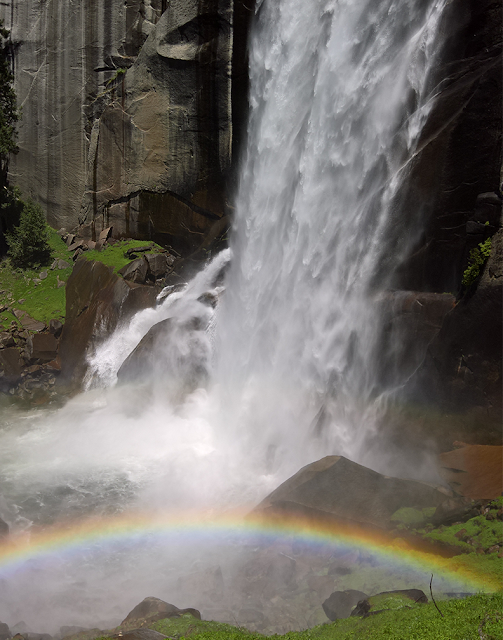 Invaluable lessons about investing that haven’t changed to this day. 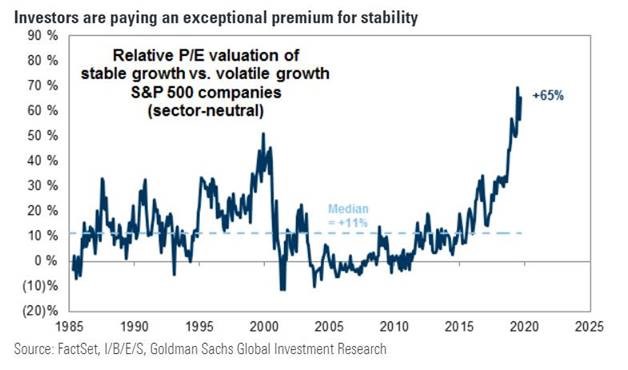 The valuation gap between stocks with stable growth and volatile growth is larger today than at any time in at least the last 35 years. The 20% of S&P 500 stocks with the most stable EBITDA growth during the past 40 quarters currently trade at a median forward P/E of 21x. This represents a 23% premium to the median S&P 500 stock's multiple of 17x. Since 1985, this premium was only exceeded in early 2000 at the peak of the Tech Bubble. The 25% discount carried by the stocks with the most volatile earnings growth (13x vs. 17x) has been deepening for a decade and is now the largest on record. 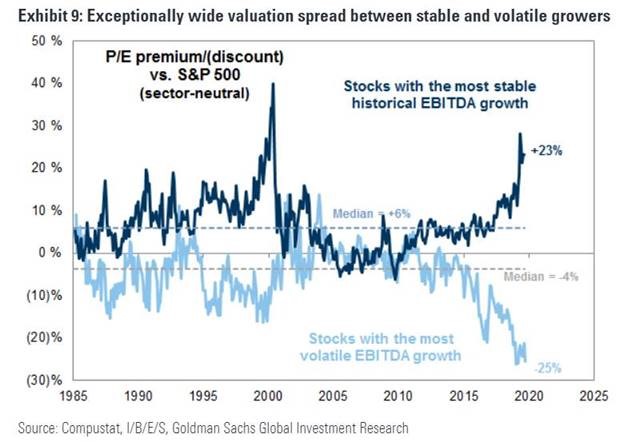 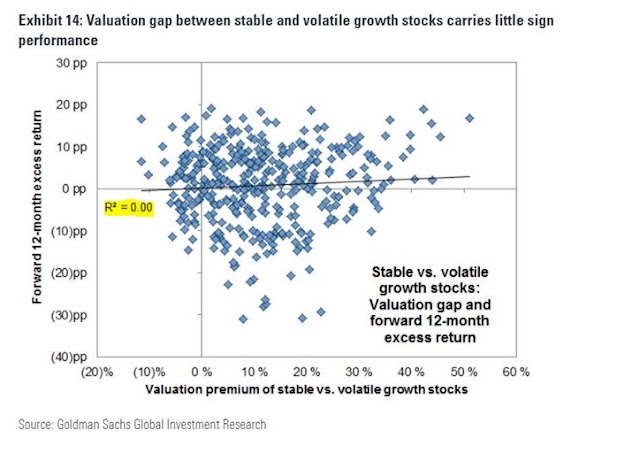 Bond and dividend yields since 2005 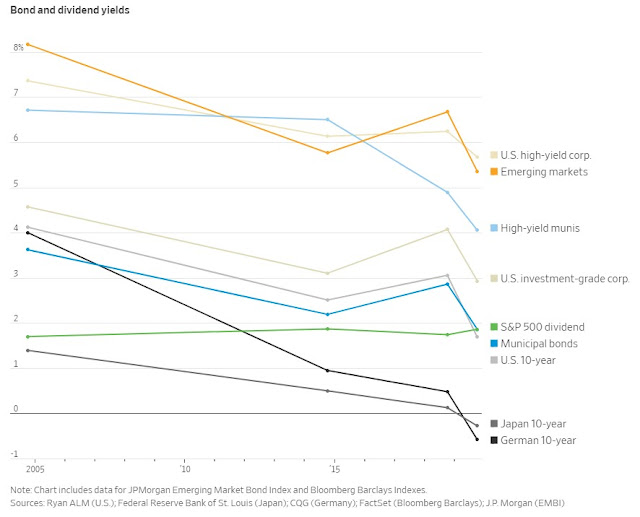 Tech IPOs aren't working for the masses
Many of the seemingly hot debuts this year have been much less so for most ordinary investors. Most big new tech issues from this year are trading below their opening prices from their first day of trading. For most new tech issues, the biggest gains come upfront. Relatively few investors get access to new shares at the listing price. But for the majority of investors who have to wait for trades to open, the returns aren’t so glamorous. 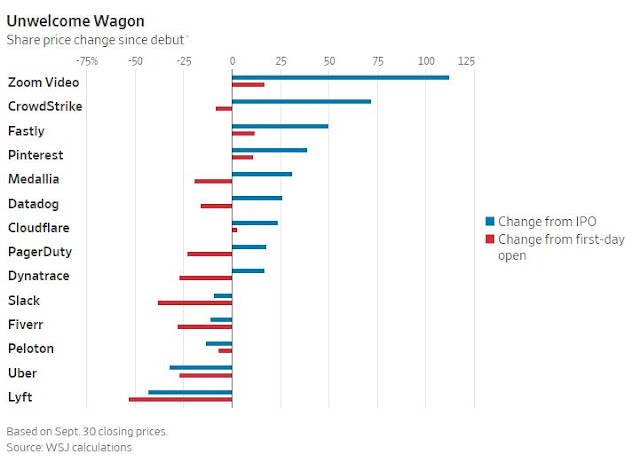 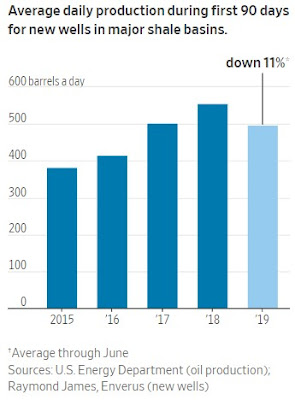