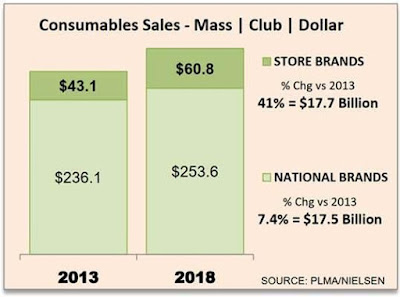 Costco’s, Kirkland Signature brand pulled in $39 billion in 2018 which dwarfed those of Kraft-Heinz, which generated $26 billion last year.

Books still make up about 80% of sales for independent bookstores sales so why are they doing so well? Many of these independents attract a loyal base of customers who seek a social hub outside of the online world. They offer anything from ukulele lessons to speed-dating events. These customers come to hang out but also buy books too.

How boomers are stealing from babies (Link)
Recently, the C.D. Howe Institute used an economic technique called lifetime generational accounting to assess the fairness of Canada's fiscal policies. Every generation pays taxes and gets government provided benefits in return. The cost of broadly shared programs like defense or the bureaucracy is generally split equally across all generations. But the size and scope of individually focused benefits like health care, education, welfare, and public pensions, along with the taxes meant to pay for them can vary greatly over time. These variations will depend on politics and demographics.

In this study, all figures are adjusted to birth-year values.

Baby boomers can expect to pay, on a net basis, around $200,000 per person over their lifetimes for all the health care, education and other social services they receive. That might seem like a lot, but it’s nothing compared to the current generation of newborns who are expected to pay $736,000 more in taxes than they will receive in individual benefits. The luckiest Canadians are those born in the 1970s. On average, these kids of boomer parents face a net tax burden of just $27,000 each for their lifetime of social benefits.

This huge discrepancy between newborns and older generations is the result of an aging population, which reduces the proportion of working folk who are available to pay taxes while increasing the amount of health care and elderly benefits owing, combined with the accumulation of past government debt.

What if you retire at a stock market peak? (Link)
Sam’s entire family has terrible luck when it comes to the timing of their retirement.

Sam’s great-grandparents retired at the end of 1928. Over the ensuing three years or so the stock market would drop close to 90%. Sam’s grandparents didn’t fare much better, retiring at the tail end of 1972. This was right before a brutal bear market which would see stocks cut in half from 1973 to 1974. Inflation also ran at a rate of 121% over the first 9 years of their retirement. Sam’s parents retired at the end of 1999, feeling pretty good at the top of the tech bubble. In the first decade of their retirement, they would witness the U.S. stock market go down by 50% on two separate occasions.

With balanced portfolios let see how Sam’s family actually ended up with an annual 4% withdrawal rate and a starting value of $1,000,000.

Even retiring right around the peak of the market, their portfolios actually ended up in a good position in each case. In each case, the ending market value for the portfolio is higher than the original amount even after accounting for annual withdrawals.

J.P. Morgan 2019 retirement guide (Link)
Here's one chart from this year's guide showing how a $10,000 initial investment fared over the past 20 years depending on whether the investor stayed invested or instead, missed some of the market's best days. As you can see you don't have to miss many good days to feel the impact. Your return quickly goes from positive to negative by missing only the 20 best days. 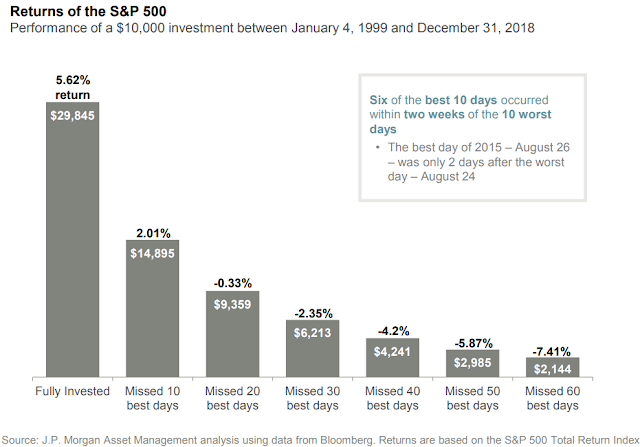 Stories play an important part in investing (Link)
Investment decision-making is a domain in which stories assume particular importance in driving, informing and justifying conclusions. Stories aid our comprehension and can lead us to believe that we understand something. They allow investors to both simplify and justify decisions to buy inherently complex investment products. Financial markets can be very unpredictable and uncomfortable. Stories are our surest means of coping with this discomfort to manufacture meaning by forging a relationship between the data and an explanation. They help us explain why the data is what it is and how it got that way. Our focus on narratives during these times of uncertainty is a major driver of some of our most damaging behaviours. We struggle to comprehend that asset prices often move in a random or unpredictable fashion; therefore, we must attach some explanation to it.

Most of us won’t make an investment decision without it being supported by some form of story, and that’s understandable; stories are effective and can be very valuable.  However, we must also take the time to consider the credibility of the narrative, the data that underpins it and our own role in shaping it.

The Anatomy of a Market Correction (Link)
Market corrections can happen for any reason and sometimes they happen for seemingly no reason at all. Typically, corrections are rooted in psychological factors or fear and are not based on market fundamentals. Here are some quick stats.

From 1980 to 2018 there were 36 corrections in the U.S. market, and only 5 (14%) of them resulted in bear markets. Most ended up being just blips on the radar of an otherwise intact bull market. 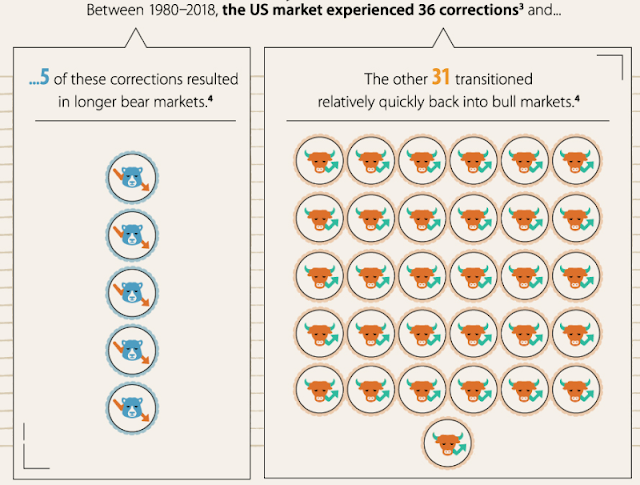