How one discount supermarket transformed the way Britain shops (Link) (Listen)
In 1990, a strange new German family-owned grocery chain named Aldi entered the UK market. It only stocked 600 basic items, all at very low prices. This would have shocked the average shopper in Britain who was accustomed to thousands of products and brands, vast fridges and aisles piled high with fresh fruit and vegetables. Most people were confident Aldi would fail in the UK, where there was discernible snobbery about discount stores.

In the 1990s Aldi focused on building slowly and steadily and remained in the Midlands and the north of England, where store rents were cheaper, and the customers less affluent.  Aldi is a private company, with no shareholders other than Karl Albrecht’s family to answer to, so they could afford to take their time. Staying privately owned allowed Aldi to be unburdened by the short-term pressures for profits faced by its publicly traded rivals.

Up until 2008, Aldi was still considered a niche UK retailer, locked out of the mainstream market. This all changed when the great financial crisis hit in late 2008. Inflation rose above 5%. Companies laid off staff. Household incomes were squeezed and the big grocery chains in the UK actually raised their prices in line with inflation to try to maintain their profit margins. People were forced to try discounters like Aldi.

For Aldi, the timing was perfect, as it was just reaching critical mass in the UK. It had about 400 stores, and an established network of manufacturers delivering products that were not only low-price, but also of reasonable quality.  This new phase of rapid growth was inevitable, and Aldi’s managers believed the financial crash brought it on sooner than expected.

Today, Aldi is still growing and is now UK’s fifth largest retailer with over 7.5% market share. Aldi also has 12% of the market in Australia and 2% in the US with plans to raise its number of stores in the US from 1,800 to 2,500 by 2022, which would make it the third-biggest chain in the US by store count, after Walmart and Kroger.

Activist investors help push Japan towards shareholder capitalism $(Link)
The story of Ms. Murakami taking on the business establishment in Japan is remarkable. Her father Yoshiaki Murakami, a well-known bureaucrat turned activist investor, taught her the value of money by making her bet on the cost of dinner. Today Ms. Murakami runs C&I Holdings, a family fund that enables her to influence how Japanese executives run their companies. Her approach is uncompromising. “Whether I am female or young, I still hold the same number of shares and I can exercise them.” Activist investors like Ms. Murakami are helping to accelerate change in Japan’s corporate culture.

Business in Japan has long been an old boys club defended by yes-men with up to half of listed firms shares in the hands of friendly shareholders (mostly banks and insurance firms who tend to support managers). Change in Japan’s corporate culture will not happen overnight but Japan’s current prime minister, Shinzo Abe has enacted new laws as part of his economic-growth strategy to challenge hoary boardroom practices, with the aim of promoting American-style shareholder capitalism. This transformation in Japan is occurring just as US politicians such as Elizabeth Warren argue for a model that looks decidedly Japanese.

You have to live it to believe it (Link)

Seeing the world around you may not be good enough to understand how it works. You have to actually experience it to learn how to operate in it. MIT scientists tested two of cats. The two cats grew up seeing the same thing. But one actually experienced real world conditions while the other merely viewed it. Once the two cats were both brought back to normal conditions the cat who only watched leaped towards the steep ledge and fell straight off. It also failed to blink when an object accelerated towards its face. It couldn’t associate visual objects with what their bodies were supposed to do. The cat that experienced the real world was normal and the other was effectively blind.

One of the most important topics in business and investing is whether all of us are, in some ways, like these blind cats. Sure, we’ve read about the Great Depression. But most of us didn’t live through it. Can we actually learn lessons from it that make us better when investing?

For example, Investor Tren Griffin wrote that he gained a lot of muscle memory that resulted from the Internet bubble. "There is no way you can fully convey in words the experience of being in the lead car as an investor in that roller coaster. Looking at the cycle after the fact is nothing like looking ahead and not knowing what will happen next. The experience still impacts the way I think and act today."

200 years of human progress (Link)
What we see or read every day skews our perception of the world and makes us believe things are getting worse and worse every day. Threatening negative news passes much more easily through our mental filters then the good news. Another problem is good news or positive progress is gradual and won’t make for good headlines.

The truth is things are unquestionably getting better over time. To help understand the transformation in living conditions here is a visualization from Our World in Data. This chart shows how the lives of 100 people would have changed over the last 200 years if they lived through this transformative period of the modern world. 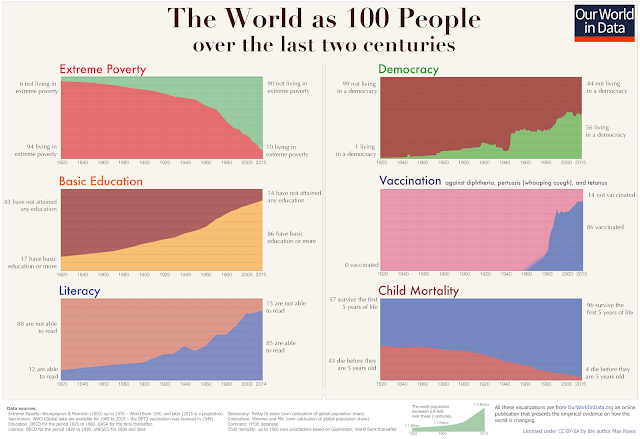 Does 2019 look similar to 1999?
A recent report by Empirical reviews Q1 2019 and highlights supporting data that suggests we could be entering the “New” New Economy Era. Factor returns for Q1 2019 look eerily similar to those in the 18 month run up to the peak in March of 2000 – with the following characteristics outperforming meaningfully:
1) Highest revenue growth
2) Most expensive based on forward P/E
3) Most expensive based on FCF Yield
4) Highest share dilution
5) Highest arbitrage risk 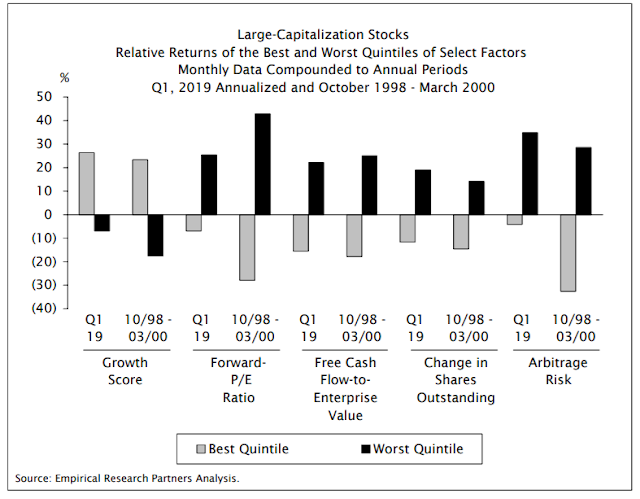 An increasing percentage of Russell 2000 companies are unprofitable. 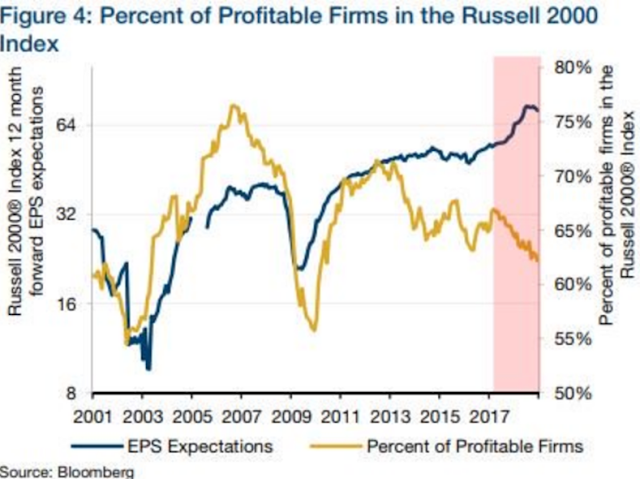 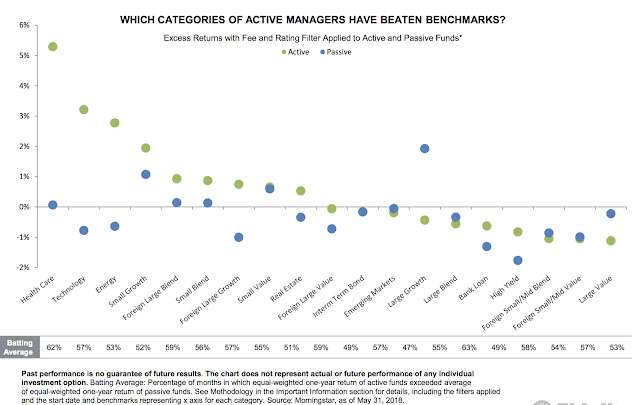 Posted by EdgePoint at 2:24 PM