Fees vs. Fines (Link)
Is market volatility a fee or a fine? Fees are something you pay for admission to get something worthwhile in return. Fines are punishment for doing something wrong. It sounds trivial, but thinking of volatility or drawdowns as fees instead of fines is an important part of developing the kind of mindset that lets you stick around long enough for compounding to work.

A reason market declines hurt and scare so many investors off is because they think of them as fines. The natural response for anyone who watches their wealth decline is to avoid future fines or market declines.

But if you view volatility as a fee, things look different. Returns are never free. They demand you pay a price, like any other product. And since market returns can be not just great but sensational over time, the fee is high. Declines, crashes, panics, manias, recessions, depressions.

The trick is convincing yourself that the fee is worth it. That, is the only way to deal with volatility; not just putting up with it, but realizing that it’s an admission fee worth paying.

Easy money
Since 2009 there have been numerous headlines telling us that the easy money had been made. Avoiding this market noise and staying invested through the drawdowns was hard. Only in hindsight does it look easy. 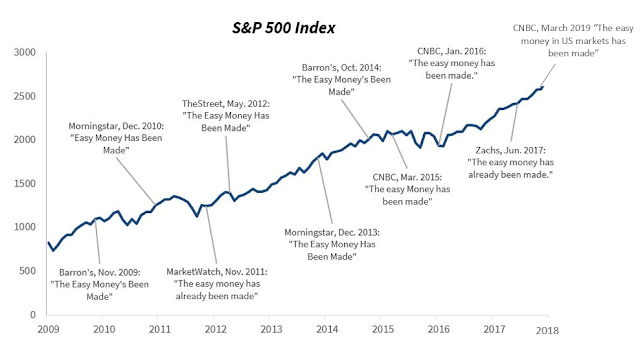 "There is no question that capitalism has been the most successful economic system the world has ever seen. It has helped lift billions of people out of poverty, and it has helped enhance the wealth, health and education of people around the world. Capitalism enables competition, innovation and choice."

"We much prefer to use our capital to grow than to buy back stock. We believe buying back stock should be considered only when either we cannot invest (sometimes as a result of regulatory policies) or we are generating excess capital that we do not expect to use in the next few years. Buybacks should not be done at the expense of investing appropriately in our company."

“Even though we’re in different industries and have different business models, there’s so much that connects us,” said Mary Rhinehart, CEO of Berkshire’s building-products maker Johns Manville. “Why wouldn’t we take advantage of the talent across the Berkshire Hathaway organization?”

Buffet explains how collaboration among Berkshire companies is largely voluntary. “The best cooperation is voluntary. That’s not a change in the culture, though. It’s sort of a sign of the culture. It really is people thinking like owners and exercising, in a sense, their independence.”


Apprenticeships vs. Business School (Link)
Enrollment in two-year, full-time MBA programs in the U.S. fell by more than one-third from 2010 to 2016 and in 2018, applications to business schools in the U.S dropped 7% from the previous year.

The rapid rate of technological change, a booming job market, and the digitization of education are chipping away at the traditional graduate-level business program. To meet today’s business needs, startups and massive companies alike are increasingly hiring technologists, developers, and engineers in place of the MBA graduates they may have preferentially hired in the past.

With disruption to the advanced business education system already here, some business schools are applying notes from their own innovation classes to brace for change. We’ve seen schools with smaller MBA programs shut their doors in favor of advanced degrees with more specialization. Over the past decade, enrollment in specialized graduate business programs doubled.

Apprenticeship models are reemerging as an effective way to train tomorrow's leaders.

How the world’s biggest brewer killed the craft beer buzz (Link)
Craft beer was born in the mid-1960s, when an heir to the Maytag appliance fortune bought a San Francisco brewery called Anchor and began marketing a full-flavored, malty beer as its flagship. Today, there are 7,000 small, independent breweries in the the U.S, the most since pre-Prohibition days. You might think, based on this, that the people have spoken; that Small Beer has won.

You would be wrong. For the past decade, Big Beer has been systematically buying up the craft breweries they couldn’t beat, and Anheuser-Busch InBev (ABI) has led the way.

ABI’s acquired craft brands tend be pretty good at making “liquid” that drinkers want, but ABI is really good at the rest. ABI’s “go-to market” machine is a marvel that gives it remarkable influence over how and where its brands are sold  and whether other brewers’ stuff is sold at all. ABI can box out rivals from retail shelves, tap towers, even entire stadium concessions.

How Lino Saputo Jr. built a global dairy empire and stood up to Big Milk (Link)
Saputo Inc. has little name recognition outside of Quebec (the company spends very little on marketing), but it has quietly grown into one of Canada’s top international success stories. With 62 plants on 5 continents and expected sales of more than $13 billion this year, 70% of which come from outside Canada, it is among the largest dairy processors in the world.

When Saputo's CEO thrust himself into the NAFTA trade fight last summer, breaking ranks with Canada’s powerful dairy lobby to side with American farmers, it was revealing: Saputo Inc. may be a creature of Canada’s dairy cartel, having benefited early on from the protectionism it entails, but its CEO is an insider more than willing to stand on the outside. Canadian dairy farmers, he told reporters last June, “want their cake, and they want to eat it too. You can’t hold onto your milk-supply-managed system and have a class of milk competing with world markets at the same time.”

For close to 50 years, Canada's supply-managed dairy industry, which shields farmers from international competition through a mix of quotas, tariffs and price controls, has defied every effort at reform. The election of Donald Trump changed everything. Trump quickly drew a large bullseye on Canadian dairy, repeatedly flaying the country for “what they've done to our dairy farm workers".

Saputo has no regrets about breaking with the dairy lobby on the issue, calling their arguments “propaganda”. For a company like Saputo that wants to continue to grow they have to think about markets outside of Canada.
Posted by EdgePoint at 3:54 PM