What happens when Canada ignores incentives and competitiveness (Link)
Between 2013 and 2017, Canadians increased investment outside the country by 74.0 per cent while foreigners investing in Canada declined by 55.1 per cent. Encana, one of the country’s premier energy companies now invests more outside of Canada than in it. And the company’s CEO recently moved to Denver and indicated that headquarter activity would become less-concentrated in Calgary. One of the country’s largest gold companies, Goldcorp, has just been purchased by an American company and much of its headquarter activity will now shift to the United States. TransCanada Pipelines recently announced it would change its name to TC Energy in part to try to attract more investors leery about investing in a perceived Canadian-only focused company.

Fossil fuels
Only 24% of Canada's total electricity generation comes from fossil fuels, ranking it sixth best out of 42 countries measured.

Emissions
Replacing coal with the large increases  in domestic natural gas production and replacing dirty imported oil with a domestically supported oil industry is apparently the biggest factor towards the U.S. leading the world in emission change. No misguided global initiative required for the US to lead the world.  Maybe it requires a new government, supportive of investment and local industry,  for us to be environmental leaders? 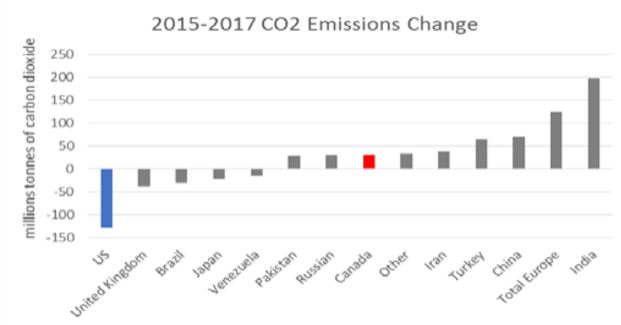