The rich are getting richer? Maybe, but they're also getting younger! (Link)
A survey of U.S. investors with $25 million or more finds their average age dropped by 11 years since 2014, to 47. These fabulously rich Americans, whose ranks have more than doubled since the depths of the Great Recession, are younger than less wealthy millionaires. The finding suggests a vast generational transfer of wealth is just beginning.

Seth Klarman offers a warning. Davos should listen. (Link)
Klarman argued that American capitalism has been damaged by the obsession with short-term stock prices. “Does anyone really believe that shareholders are the only constituency that matters: not customers, not employees, not the community or the country or Planet Earth?” he asked. In those remarks, Klarman challenged CEOs and fellow-investors to accept greater responsibility for the consequences of their actions. “It’s a choice to do things that ‘maximize profits,’ to pay people as little as you can, or work them as hard as you can,” he said. “It’s a choice to maintain pleasant working conditions or, alternatively, particularly harsh ones, to offer good benefits or paltry ones.” Also, without naming specific cases, he criticized the kind of buyouts in which private-equity investors saddled a troubled company with so much debt that it helped push the company into bankruptcy. “I’m convinced, as an investor, that the world I live in every day has gotten more short-term-oriented,” he said. “The pressure on the game changed the game.” Some investors, he said, are too quick to demand ephemeral fixes: “Why aren’t you restructuring? Why aren’t you doing a spinoff? Why aren’t you buying back stock?"

The world's biggest brands want you to refill your orange juice and deodorant $(Link)
Proponents of refillables say they can reduce greenhouse-gas emissions, waste and energy use. A bottle refilled five times as part of the project has an impact equivalent to five single-use bottles when accounting for the use of resources and the release of pollutants, estimates TerraCycle. Each use after that is incrementally better for the environment. 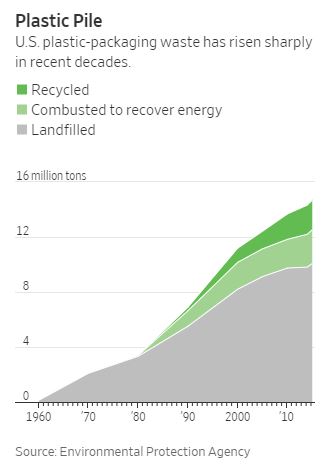 Posted by EdgePoint at 8:35 AM